Tonight, Luann De Lesseps sits down with Andy Cohen to talk about her failed marriage to husband Tom D’Agostino. But, De Lesseps also recently opened up to People about what truly caused her to call it quits. De Lesseps explained:

Getting caught in the press going out and meeting with ex-girlfriends, that caused a lot of fights to go on … He ended up calling an ex-girlfriend to see where they were. And that’s when I said to myself, ‘This is the last straw. This is really the last straw.’

De Lesseps further elaborates on this with Andy Cohen, saying:

Tom went out and he called up an old girlfriend, and they went out with a group of people and I didn’t know about it. I found out about it the next day in the press. So for me, that was, like, the final straw. I can’t do this anymore.

This incident apparently happened a week before the RHONY reunion show taping.

De Lesseps also credits Real Housewives of New York with opening her eyes. Though countless friends and cast members warned her throughout this past season that D’Agostino was bad news, she carried on and followed through with their wedding. Unfortunately, once De Lesseps watched the show as it aired, she noticed what some of the other women had been talking about, as she explained:

I started seeing things on the show, which I didn’t know he was saying. Like, ‘I’m a dog with a leash.’ All of these things were hurtful, on top of the continued going out and still making the same circle, which I said, ‘Please don’t do that, because it’s not a good look for you.’

He assured me he wasn’t cheating on me, but that was not the perception of people around us. We live under the spotlight, so you can’t act a certain way … you might be friends with your exes but it doesn’t look good. I believe he was not cheating on me. And I hope that was the case.

De Lesseps and D’Agostino announced their divorce on August 3, 2017 via Twitter, with De Lesseps writing:

It’s with great sadness that Tom & I agreed to divorce. We care for each other very much, hope you respect our privacy during this sad time!

Since her split, De Lesseps has been posting photos on Instagram of her traveling, relaxing and spending time with friends. But, De Lesseps does say her split from D’Agostino has taken its toll on her. She revealed to People:

This has been one of the toughest times of my life — that, and getting divorced the first time. I have a sense of failure, and I hate to fail. I wake up at night, and my bed feels empty now that he’s gone.

While grieving over the end of her marriage, De Lesseps has said that her two children have definitely been supportive.

Loving our new mode of transportation! ?

And, as for what Tom D’Agostino has had to say about his marriage ending, he told E! News:

I fell in love, got married quickly and am very sad that two people in love are not together. The publicized reasons for the divorce make for a great Reality TV story line. I wish Luann much happiness and love. 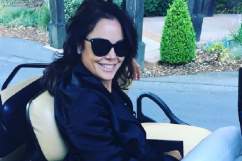 Deborah Driggs – Who Is the Woman Tom D’Agostino Allegedly Cheated With?