Maria Salazar is an intriguing character in Narcos Season 3. Who plays the dewy-eyed, innocent but also street-wise, cartel girlfriend?

That would be actress Andrea Londo. She’s gaining newfound attention for playing Maria, who barters her sexuality for protection (for herself and her young son), switching cartels as they wax and wane.

I know all people are going to talk about regarding episode 1 is @albertoammann and those last 7 minutes ??? but here's a "picture" of Maria from the same episode anyway haha #MariaSalazar #NarcosSeason3

Londo defended the Maria Salazar character on Instagram in response to an article that said she fit a crying woman trope. She wrote:

We still have a lot of work to do when it comes to female characters and the portrayal of women in movies, shows, etc. but I don’t think it’s fair to say Maria Salazar ‘is the one to truly fill Narcos’ Crying Woman trope’ and here’s why:

When María cries – when she can’t find her husband and when she’s told he’s dead – it’s hardly a crazy situation to cry over, rather just human. (Crying shouldn’t be treated as a weakness. Strong people can cry too. Our humanity is our greatest strength, and should never be shamed, it should be encouraged.) Her answer to the situation however? To sit down and negotiate, like a business woman. Not a weak one. It may sound appalling, and that’s because it is! It was Colombia in the 1990s not present day USA (roughly 25-30 year gap). It’s sad but it’s true, women were ‘arm candy’ and indeed did ‘follow [their] spouse like his trusty canine companion as opposed to his actual human wife.’

Within the confinements of her world, Maria is clever and knows how to survive. Her character traits are not simply that she ‘needs a tissue and a better man’ (she didn’t leave her husband, he was killed). She’s brave and smart within her limitations: standing up to the biggest drug-lord of that time and demanding an answer, ensuring survival and security for her and her child, and making sure this new game she’s been thrown into is played under her rules.

She’s no super-hero, or role model, but Maria is a real woman with real emotions and an enormous amount of fight in her, that when placed in morally ambiguous situations chooses that which is best for her future, not that which is deemed correct by the standards of her society.

Londo was responding to an article posted by Refinery29 that read in part, “The third woman to appear in ‘Kingpin’ is the one to truly fill Narcos’ Crying Woman trope: Maria Salazar (Andrea Londo). Maria makes her debut as arm candy to her husband Claudio Salazar (Carlos Camacho). Maria is made to follow her spouse like his trusty canine companion as opposed to his actual human wife. The beautiful young woman immediately catches the eye of druglord Miguel Rodriguez (Francisco Denis).”

According to IMDB, Andrea Londo “is an actress, known for Narcos (2015), Criminal Minds: Beyond Borders (2016) and Pasaporte (2014).” She also appeared on the show Faking It and Catfish: The TV Show.

Deadline reported that Londo will be featured in “a series-regular role opposite JD Pardo in Mayans MC, Kurt Sutter’s Sons of Anarchy spinoff pilot for FX.”

She will play “Carnalita, who, as a child, watched her family die at the hands of the Galindo cartel. Now, streetwise and driven, she protects the lost children orphaned by cartel violence.”

In Narcos 3, Maria plays the girlfriend of Miguel Rodriguez-Orejuela, one of the powerful godfathers of the Cali Cartel. You can read more about the real Miguel here: 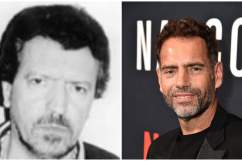