Kevin Hart took to Instagram recently to apologize publicly to his wife and children for stepping outside of his marriage. And now, the news has spread that Hart is involved in a cheating scandal, with an unknown party trying to extort money out of him, according to TMZ. Hart has been allegedly filmed in bed with a woman and there is a video that has been threatened to be leaked unless Hart forks over a hefty sum. According to Hart’s reps, there is currently an investigation underway, as the woman in the video with Hart maintains that she has nothing to do with the extortion of Hart. Montia Sabbag has been identified as the woman in the video and TMZ reports that she says she will take a lie detector case for Hart if he hands over $420,000. Her attorney Lisa Bloom has said that her client is not requesting any money from Hart.

So, who is Sabbag? Where is she from? How has this affected Hart’s family? Get to know more about Sabbag and Hart’s situation as you check out Sabbag’s best photos from Instagram and Twitter below.

Apparently, Sabbag was reported to be a stripper who was in Las Vegas, Nevada in August 2017, when she encountered Hart. She actually lives in Long Beach, California and is 27 years old. Page Six reports that an extortionist is trying to get $10 million out of Kevin Hart for the video involving Sabbag and Hart.

Sabbag stated in a press conference that she is an actress and not a stripper.

Sabbag’s Instagram profile is set to private, but you can see her photo in the upper left-hand corner. Sabbag says that she has nothing to do with the video of her with Hart and this is not the first time that Hart has been involved in a cheating scandal. When talking about his marriage to ex-wife Torrei Hart, he admitted to cheating, saying in Kevin Hart: Let Me Explain, that:

Kevin Hart proposed to his current wife Eniko Parrish at one of her birthday celebrations and now, Parrish is actually pregnant with her first child. This will be the third kid for Hart.

When apologizing to his wife and children via Instagram for his cheating on wife Parrish and getting mixed up in this mess, Hart stated:

I made a bad error in judgment … Sending so many apologies to my wife and kids. I gotta do better and I will. I’m not perfect and I never claimed to be … I love you all.

Hart has returned to work amid the cheating scandal and his wife has been photographed still wearing her wedding ring.

A rep for Hart said in a statement to People that:

Over the summer, Hart was involved in buzz about him possibly cheating on his wife as well. He denied the allegations. 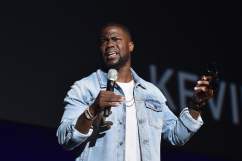