The season 15 premiere of NCIS airs tonight on CBS. Get the details on what time the show airs, an episode guide, cast spoilers and more below.

EPISODE 1 TITLE & OFFICIAL CBS SYNOPSIS: “House Divided” – Two months after Gibbs and McGee were last seen fighting an elusive group of rebels in a Paraguay jungle, the NCIS team in D.C. tirelessly searches for their missing colleagues. Also, Vance and Torres are summoned to a congressional hearing regarding the fallout from the Paraguay mission.

EPISODE 2 TITLE & OFFICIAL CBS SYNOPSIS: “Twofer” – NCIS is called in to investigate when the body of a missing Navy Lieutenant who disappeared a year and a half ago is located by a cemetery grounds crew while they are relocating caskets on the property. Also, Gibbs and McGee must pass a psych evaluation with Doctor Grace Confalone (Laura San Giacomo) before officially resuming all work responsibilities.

EPISODE 4 TITLE & OFFICIAL CBS SYNOPSIS: “Skeleton Crew” – Director Vance welcomes NCIS Special Agent Jacqueline “Jack” Sloane (Maria Bello), a forensic psychologist he lobbied to transfer from California, to headquarters. Also, in the midst of a storm that has shut down Washington, D.C. and knocked out power, the NCIS team investigates the kidnapping of a sailor, which sends Torres and Bishop out to sea to track evidence. 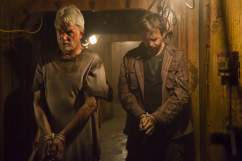