My best friend. My other half. My favorite little shit. I hated you quiet often but loved the hell out of u no matter what. My heart is completely broken. This strong an amazing young man will be donating his heart, lungs, and organs to save people's lives. I'm going to miss you so much Tristen.. your to young to say goodbye so I'll see u again brother.

Nico Scholly’s brother Tristen was only 21 when he died in November 2016. Tristen reportedly died after a night of drinking at a concert. He was staying with another sibling when he was said to have gone out on the third-floor balcony for a cigarette. Unfortunately, Tristen fell from the balcony and died.

After his fall, Tristen was put into a medically-induced coma for 24 hours, but there was too much brain damage from his injuries. An incident report published by Radar Online stated that Tristen’s body was found “laying in the alley, unresponsive and with a deep laceration to the forehead”. The report also read:

A friend of the victim contacted [redacted] about an hour later and notified [redacted] that the victim had woken up and went outside on the back balcony to smoke a cigarette. He fell from the third floor and landed in the alley … It appears that that victim may have hit a dumpster before landing. No one had witness the fall and the victim’s friend that discovered the victim was not on scene when R/OS arrived … It was determined that the victim had multiple skull fractures, blood on the brain, and his brain had shifted from the fall. The victim also has a broken left arm.

My best friend. My other half. My favorite little shit. I hated you quiet often but loved the hell out of u no matter what. My heart is completely broken. This strong an amazing young man will be donating his heart, lungs, and organs to save people’s lives. I’m going to miss you so much Tristen. your to young to say goodbye so I’ll see u again brother.

This brave amazing guy is donating his lungs, heart, and other organs. He will save 4 different individuals lives. I love u so much.

He also sent out a heartbreaking tweet in the wake of Tristen’s passing, which said:

My younger brother of 21 is now an [angel]. So please pray for my family. I’ve never felt this pain before. I never understood the term broken-hearted til now. I just want to wake up.

In an interview with The Daily Dish, Scholly talked about how impressive and amazing it is that his brother donated his organs to others in need. Scholly stated:

To see how heroic it is that he can now help other people and he’s still alive today through other people, it’s really just saved me a lot of grief, because this is still something that I struggle with every single day. But knowing that other people are alive because of it and knowing people are getting healthy because of him, I’m so thankful for that … He was just an all-around amazing person. He was definitely my best friend. We were like twins, always hung out, always got along. We were super close. He was one of those kids [who didn’t have] any money, maybe 100 bucks to his name, and he’s walking in Chicago and he saw a homeless person, he’d give him 100 bucks. That was one of his problems. He wouldn’t stop doing stuff like that. But that’s just the type of person he was. He saw someone else in need, and he would help them before he helped himself.

Recently, Scholly paid tribute to his late brother Tristen in an Instagram post. With the below photo, Scholly wrote:

Crazy how fast this years gone but not a day goes by I don’t think about this guy here. I wear his ink proudly everyday. Coming up almost to one year is a pretty scary thought but grateful for my brother being a hero. #tristenscottfoundation #hero #giftofhope #organdonor #bestfriend #brother #family #belowdeck

Crazy how fast this years gone but not a day goes by I don't think about this guy here. I wear his ink proudly everyday. Coming up almost to one year is a pretty scary thought but grateful for my brother being a hero. #tristenscottfoundation #hero #giftofhope #organdonor #bestfriend #brother #family #belowdeck

At the beginning of Below Deck season 5, Nico Scholly’s family tragedy comes to light and he must deal with the loss on the show.

May 25, 2017 would have been Tristen Scholly’s 22nd birthday and in his memory, a foundation has been created. The official mission of the Tristen Scott Foundation states, “We are the first foundation actively trying to support donor families. This was all made possible by the Kindness of others trying to help during a tragedy.” Scholly explained the reasoning behind creating the foundation, telling Bravo:

A lot of people, obviously, don’t expect something like this to happen, so they’re not financially there to have someone cremated or a funeral. Even the hospital bills were absolutely outrageous for us. So just really helping out any family that we can and just trying to grow the foundation so we can help as much as possible.

In creating the foundation, Scholly’s mother revealed that:

I am a Mother who is living through every parent’s worst nightmare. On November 13, 2016, my world was shattered into pieces after discovering my son, Tristen, had a tragic fall and was declared brain dead. He was only 21-years-young. When we arrived at Northwestern Hospital, we were brought into the “quiet room” and told that there was nothing more they could do. Some people say “let them go in peace,” but we knew we had to honor Tristen and allow him to donate his organs to “Save & Change Lives.” That’s when Tristen really became a true Hero. Tristen’s story doesn’t end here; his organs were given to save the lives of people who had been waiting for life saving and changing transplants. His heroism is what inspired me to create The Tristen Scott Foundation NFP.

It's official. 5/27 The Tristen Scott Foundation will be hosting its first fund raise at Niko's Redmill in Woodstock, Illinois. See you there. #giftoflife #giftofhope #tristenscottfoundation

After Scholly’s family tragedy, he said that he ventured back out again to yachting in order to get away, but he ended up missing his family. 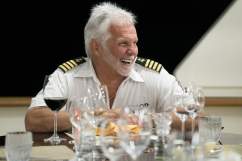