Paul Abrahamian and Christmas Abbott are two of the three houseguests headed into the finale episode of Big Brother 19 and they have been close throughout the season. In fact, Abbott previously told the cameras that she has something of a crush on Abrahamian and that he makes her smile. Will these two ride off into the sunset together after Big Brother concludes?

Abrahamian is favored to win this season, as he is a returning veteran on the show and has been a master manipulator throughout the season. But, will the jury members that he screwed over in the past agree to give him their votes?

When it comes to who will win America’s Favorite Houseguest, host Julie Chen told The Hollywood Reporter her theories:

Kevin was popular throughout for a multitude of reasons. Jason, especially finding out his wife was pregnant he was a very likeable guy. Jessica and Cody became the down and out underdogs to root for. I wouldn’t count them out. Paul’s one of these love him or hate him people. He’s very polarizing. I don’t know if his fans will outweigh those who this year decided they don’t like him.

And, as for who she thinks will win this season, Chen revealed:

The person who has severe draw backs is Christmas. It’s not her fault, but how do you root for someone with a broken foot? That broken foot made a little bit of a mean side to her show itself. You saw this fierce competitive person and then you saw that mean side when she turned on Kevin that one day and was kind of psycho. That was ugly … Say what you will about Josh, he’s an emotional wreck, did he display boy scout behavior? Absolutely not, but he for me is the most rootable one … I’ve seen the jury sway back and forth from being logical to a roller coaster of emotions of being bitter and reliving their personal wounds. I want to say the majority might like Josh a little bit more against Paul, begrudgingly I think they might give him the win.

Though Abbott has made it to the final episode of the show, there’s a good chance that it will be Paul Abrahamian and Josh Martinez up against each other in the finale.

Maybe Abrahamian will take Abbott on a vacation with him when this is all over. 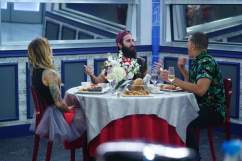