Paul Staehle of 90 Day Fiance: Before the 90 Days met his girlfriend Karine online, but the two have difficult communicating since neither of them knows each other’s language. When Paul ventures out to visit Karine, he has her stay with him in his hotel, but she is put off when he wants to wait to have sex. Then, when Paul revealed that he wanted her to take a pregnancy and STD test, she was a little uneasy but she agreed to take the tests. Paul said his reason for his distrust was based on past experiences. On the show, Paul explained:

I haven’t had the best of luck in past relationships here locally. I’ve been betrayed. I’ve experienced unfaithful girlfriends — a lot of negative, chaotic things. Being burned that many times definitely affects anybody.

But, it looks like Paul doesn’t have the cleanest backstory either. Starcasm reports that the Kentucky corrections website reports that Paul was found guilty of felony arson in 2014. In 2007, Paul was reported to have committed second-degree arson and he was convicted seven years later. Apparently, he is currently still being supervised under shock probation, which means that “he probably served a brief amount of time in jail before being released. The site also indicates that his supervision is scheduled to end in April of 2020.”

Starcasm also reports that Paul was arrested in Taylorsville, Kentucky in 2013. He was then charged with Violation of a Kentucky EPO (Emergency Protective Order) and a DVO (Domestic Violence Order).

On his reality show, Paul seemed to glaze over his arrest record, revealing that:

One of the relationships I was in ended so badly, it ended up getting me in some serious trouble and I haven’t explained it all to Karine yet. 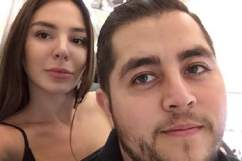