The latest episode of Rick and Morty was jam packed with memories that Morty had forgotten. Season 3 Episode 8 moved so fast it was tough to keep up at times. There were so many “Morty’s Mind Blowers” memories in the episode, it’s easy to forget some of them. That’s why we’ve put together this complete list of every memory Morty relived during the Morty’s Mind Blowers episode.

First, here is every memory that Morty had before the montage scene, in order, followed by the memories from that quick montage scene at the end.

Do you recognize any of the alien species that are caught and on display?

In this photo, you can just make out two very sad, very old Meeseeks:

It was so easy for Morty to mislead Floop Floopian about the afterlife… And what terrible results!

Rick has some strange labels for some of those memories. This is the sad one where Beth had no trouble picking between Summer and Morty. The answer, very quickly, was Summer. Poor Morty. :(

This is when his family’s love saved Morty from becoming Volta-ma-tron Destroyer of Worlds. It’s unclear if this is a continuation of the memory above or a different one. But his family had a tough time focusing on just loving him and freeing him from the evil influence. They kept laughing at him instead.

This was the next memory Morty relived. And it was so sad. Bebo didn’t have to die, if only Rick hadn’t made that mistake. :(

I loved this one; it might have been my favorite. Don’t take Rick for granite. And did you notice that it looks like Morty is wearing lipstick? I wish I could have seen this in a full episode.

Who knew that experiencing true level was so amazing? Summer, meanwhile, is not impressed.

The Lightswitch Incident or “Grab a Shovel”

Rick pointing out how Morty subtly tried to not show that he flipped the wrong switch at first was hilarious. I have to admit that I’ve done this more times than I’d like to remember… But the repercussions of switching the wrong switch… well that was dark. Who were these people who are now dead? Why did Rick have them? And why did their lives depend on a light switch?

Apparently the squirrels are the Illuminati and they forced Rick and Morty to abandon more than just the Cronenberg dimension. Those are some pretty powerful squirrels.

And last but not least, we come upon all of the memories Morty had in his montage scene, after he and Rick had their minds pretty much completely wiped.

Apparently Mr. Poopy Butthole proposed to Morty at some point, and Morty was ecstatic about it.

And Morty’s hand was chopped off… (Ouch!)

Rick enjoyed this moment a little too much… :D

And then there was that time Rick laughed while mutating Morty into some crazy being.

This one was just hilarious and a bit unfair… Rick erased Morty’s memory of winning at checkers.

I love that Rick erased Morty’s memory of his 13th birthday cake, just because of Rick’s embarrassing moment.

Burying a dead Santa… That one must have been pretty traumatic.

And this one looks pretty unpleasant.

Juggling a Morty who looks like he was turned into a toy somehow and then torn into pieces.

Morty as a puppy. Ha! No wonder Morty didn’t want to remember that one.

And that’s everything. We have a collection of memories Morty didn’t want to remember and memories that Rick thought it was best for Morty to forget. And a few thrown in that embarrassed Rick and he just didn’t want Morty to give him a hard time about later.

This was a dense but hilarious episode. I’ll be thinking about this for a long time.

To read a review of the episode, see my story below: 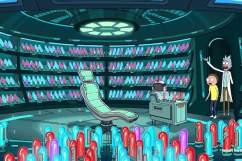