After the amazing episode that was “The Ricklantis Mixup” aka “Tales from the Citadel,” it’s going to be tough to top it. But next week’s episode is already looking pretty good! Here is a video preview and photos from the trailer, in case you’re interested in analyzing next week’s episode and getting an idea of what’s coming up.

In case you’re interested in exactly what the dialogue for the trailer is, here it is:

Rick: Don’t drop the truth tortoise! Also, whatever you do, don’t look into its eyes!

Morty: I can’t go on like this with the truth tortoise *** with my head.

Rick: Come on Morty, come with me.

Morty: What the hell is this?

Rick: This, Morty, is my archive of all the experiences you begged me to remove from your life. I call them “Morty’s Mind Blowers.” And we’ll be doing this instead of Interdimensional Cable.

Here are some photos from next week’s episode:

First, they’re being chased through some crazy room where the stairs are upside down and turned all around. You can see that Morty is upside down on a floor-that’s-the-ceiling right below the creature chasing him.

They’re stealing something from another world again. You can see that in the back of the room, it looks like there’s a carving that looks just like the Truth Tortoise.

And of course, Morty has to stare into its eyes.

But seriously, this tortoise is kind of cute. I would probably stare at it too!

As they run through the hall, they pass a tortoise statue. I bet this was a temple of some sort for worshipping the Truth Tortoise.

All that truth is making Morty sick. Is it because he remembers everything Rick hid from him?

It’s crazy to think that Morty wanted this many memories removed from his mind! It’s a fair bet that Rick will try to remove the latest “truth” from Morty’s mind too. But are we going to get to see some secrets about Rick and Morty’s adventures revealed?

I love the idea that this is the new Interdimensional Cable episode. I loved those episodes, and a version of that — only about Rick and Morty’s real adventures — is very appealing. 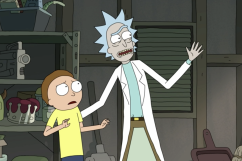