What’s a season premiere without some drama? Tonight is the season 4 premiere of Scorpion on CBS at 10pm ET/PT, and an ex-member of Team Scorpion is about to throw a wrench into their plans.

Oh, and there will also be a musical dance number. Yes– you heard that right.

According to EW, the show’s executive producers wanted to begin the season with a musical number because they wanted to make sure that audiences know even though Walter and Paige are an item, things will still be fun. EP Nick Santora, who wrote the song’s lyrics, tells EW, “It doesn’t mean that the show still isn’t going to be fun, because so much of the fun was in the will-they-won’t-they… Two, just because they’re together, doesn’t mean it’s going to go smoothly, because this is a genius and a human, after all.”

The premiere plot will center on a tiny earthquake that takes place under the arctic shelf and threatens to bring about the end of mankind’s extinction.

Read on to find out when and where to watch the season 4 premiere.

SYNOPSIS: Season 4 begins with Team Scorpion being forced to work with their old nemesis Mark Collins in order to prevent the extinction of mankind. Meanwhile, Walter and Paige awkwardly navigate their new relationship… More About Scorpion 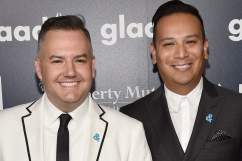