Stephen Colbert is one of the most successful television hosts in the world, and his net worth certainly shows that. This year, the comedian boasts an impressive net worth of approximately $50 million.

On Sunday, Colbert will be hosting the 69th Primetime Emmy Awards. In a recent interview with CBS News, the 53-year-old said, “Well, it’s an honor. It’s an honor to host the Emmys. And it’s fun because if you lose, you still have something to do. You know. Same reason I liked waiting tables on New Year’s Eve. If I didn’t like the party, I still had a job.”

Read on to learn more about Colbert’s net worth.

1. He and Jimmy Fallon Were the Highest-Paid Late-Night Hosts of 2016

According to Forbes Colbert and Fallon were the highest-paid late-night hosts of 2016. Colbert brought home an impressive $15 million between June 2015 and June 2016, while Jimmy Fallon also raked in $15 million. Conan O’Brien earned $12.5 million in the same period, while Kimmel earned $12 million, according to Forbes.

The Late Show with Stephen Colbert has performed extremely well this year. According to Nielson reports obtained by Variety, Colbert averaged a .53 rating in the 18-49 demographic and 3.38 million viewers per episode. The Tonight Show Starring Jimmy Fallon, meanwhile, averaged a .66 rating and 2.59 million views.

2. He Has Said He ‘Doesn’t Live Like a Millionaire’

GettyComedian Stephen Colbert poses for photos to celebrate the launch of his new Ben & Jerry’s ice cream AmeriCone Dream at the Dream Hotel on March 05, 2007 in New York City.

In a 2016 interview with The Hollywood Reporter, Colbert said just because he makes a lot of money doesn’t mean he lives a lavish lifestyle. “I eat McDonald’s, I drink Coca-Cola, I like a Bud Light Lime. I do. I mean, in some ways I’m extremely pedestrian.”

Over the course of his illustrious career, Colbert has been involved in a number of projects that have helped his fortune grow– he’s worked with Comedy Central, was a correspondent on The Daily Show, and even held guest appearances on The Simpsons.

3. He Has Twice Been Named Among the 100 Most Influential People by TIME

Colbert was raised in the small town of James Island, South Carolina, along with 10 brothers and sisters. When he was just 10, he tragically lost his father and two brothers in a plane crash. Upon graduating high school, the TV host intended on becoming a theater actor. At Northwestern University, however, he developed an interest in improvisational theater and met Second City director Del Close. Colbert rose to prominence as a correspondent on Comedy Central’s The Daily Show. He left in 2005 to host The Colbert Report.

At tonight’s Emmys, Late Show has been nominated six times, and Colbert has the potential to become the first performer in TV Academy history to win multiple awards while also hosting the awards ceremony. Colbert’s Late Show is up for direction and writing for a variety series, variety series overall, and his election-night special has also earned nominations in the same category.

A giant container of Stephen Colbert’s new ice cream called AmeriCone Dream by Ben & Jerry’s during a celebration for the launch of the new ice cream at the Dream Hotel on March 05, 2007 in New York City.

In 2007, Ben & Jerry’s introduced an ice cream flavor in his name– “Stephen Colbert’s AmeriCone Dream”. Proceeds from the ice cream went towards helping disadvantaged children, military families, and environmental causes, according to Time.

In 2008, Colbert, interestingly, had a California spider named after him— the Aptostichus stephencolberti. 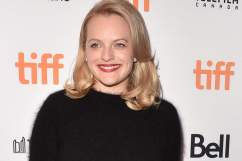