Stranger Things 2 is just around the corner. The new season will return to Netflix on October 27.

The mysterious and thrilling series comes from the creative minds of the Duffer Brothers, who wrote, directed, created, and co-executively produced the show, along with Shawn Levy and Dan Cohen, who serve as co-executive producers.

Mike, Dustin, Lucas, and Will be returning for the new season, which producer and director Shawn Levy says will be much more ominous than the first. “This is definitely darker,” he tells Fox News. “I hope everyone’s down with this. Because the threats to Hawkins and to our characters are bigger, darker, oftentimes scarier. So, people who found Season 1 too scary for them, probably you’re going to be more scared by Season 2. But again, the best thing I can tell you is, through it all, it’s got the best heart.”

In an interview at Comic-Con, the cast opened up about what else fans can expect in the new season. “In Season 2, it’s a year later and you can’t do the same thing…” Speaking of his character, Hopper, David Harbour said, “[But] there is a psychology of a heroic action where someone does something heroic [and wonders] whether they can live up to that in their daily life.”

Noah Schnapp, who plays Will, added on that fans can expect more bravery from his character this season. “You’ll learn how the upside-down affected Will, and you’ll get more into his storyline.”

Season 1 of Stranger Things, which raked in an impressive 18 Emmy nominations, follows a group of young kids living in Indiana in the ’80s. When they meet an odd girl who goes by Eleven and has strange powers, things are, literally and figuratively, turned Upside Down. The show first appeared on Netflix July 15, 2016, and has since become one of the streaming service’s top series to date.

New characters who will be introduced in season 2 include Dacre Montgomery as Billy, Sadie Sink as Max, and Paul Reiser as Dr. Owens. 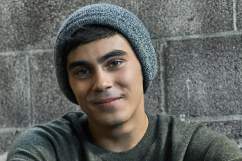