The LEGO Movie universe expands this weekend with The LEGO Ninjago Movie, which brings to life one of LEGO’s own original themes. If you’re heading to the theater with your family to see the movie, you might be wondering if there are any extras after the film is over. The answer is yes, but you don’t have to sit through all of the credits to see it.

Although there are no scenes at the very end of the movie, there is a scene after the movie is over featuring a live-action outtake with Jackie Chan. The action movie icon stars in the live-action framing scenes in the film and is also the voice of Master Wu. Chan also helped choreograph the animated action scenes.

In a interview with The Los Angeles Times, the 63-year-old Chan said he loves being recognized by the younger crowd.

“Even now, after all these years, the young kids still know me,” the honorary Oscar recipient said. “A lot of actors, you ask some young kid, ‘Do you know this guy?’ – and they don’t know. But ask, ‘Do you know Jackie Chan?’ ‘Yes’ – from 3 years old to 80 years old. I’ve been making movies for 57 years. More than 200 movies. I’m just so lucky. Even without my face, children recognize my voice.”

Unlike The LEGO Movie and LEGO Batman, Ninjago is completely inspired by a franchise created by LEGO itself. The LEGO Ninjago toy line began in 2011 and spawned a successful animated series. The film currently has a 49 percent fresh rating on Rotten Tomatoes, which is much lower than its two predecessors. 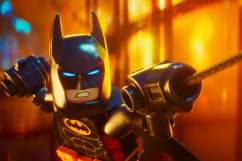