Over a year after Larry Wilmore’s The Nightly Show was cancelled, Comedy Central is finally launching a new political satire series to go with The Daily Show With Trevor Noah. Daily Show veteran Jordan Klepper will star in The Opposition W/ Jordan Klepper, which begins at 11:30 p.m. ET on Monday, September 25, 2017. Read on for a preview of the series.

Klepper’s new series is a satirical look at conspiracy theorists, the alt-right and the media itself. Its tagline is “Not Mainstream. Not Establishment. Not Helping.” Like Stephen Colbert did for The Colbert Report, Klepper is playing a fictionalized version of himself in the series.

“You are seeing a version of me that that is a little more unaware, who doesn’t have perspective in the way that Jordan Klepper the person might have that perspective,” the comedian said in an interview with Indiewire. “And then you sprinkle on the realities of this world, which is simply that you choose your own reality, which becomes the truth to you, and you can feed it out into your own echo chamber. It’s been fun to extend the character that I’ve been playing. They gave me a few new toys and a few new things to be paranoid about.”

Klepper told Indiewire that the idea behind the show is that it’s an alt-media site’s show that takes over Comedy Central’s 11:30 p.m. timeslot.

“We’re trying to build backstories there — like, The Opposition has a 22-minute television show, but there’s also radio shows that are going 24 hours a day, and occasionally you’ll see clips from things like that,” he explained to the site.

The 38-year-old Klepper started on The Daily Show in 2014 and remained on the series after Jon Stewart left. He also guest hosted when Noah missed episodes in 2016 because of an illness. In June, he hosted his own Comedy Central special, Jordan Klepper Solves Guns. His wife, Laura Grey, is among The Opposition correspondents. 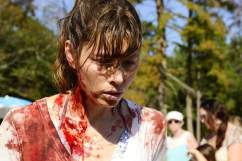