The newest science fiction series to hit mainstream television is The Orville. The show was originally understood to be a Star Trek parody, but now it appears to be much more than that. It’s an entertaining blend of drama and comedy, with a story about a vessel exploring in space. Fans are already making comparisons between The Orville and prior Star Trek series (and those comparisons are likely to increase once CBS’ new Star Trek series premieres in a few days.) That’s why we’re bringing you the opening intro videos for The Orville and many Star Trek series, updated to include Star Trek: Discovery, so you can compare them right here.  After you read the story, scroll to the bottom and take our poll, letting us know which intro you like the best!

One of the biggest points of comparison so far can be seen in The Orville‘s beautiful opening montage, which is reminding many viewers of Star Trek opening themes.

Here’s The Orville‘s opening theme. I was really impressed with the effort they put into making a beautiful opening sequence.

Some are saying that The Orville rivals Star Trek Voyager and is everything the Voyager’s opening theme wanted to be.

This is Voyager’s intro for Season 1:

Of course, Star Trek the Next Generation‘s (remastered for the Bluray):

And let us not forget, Enterprise. (Well, some fans might want to forget the Enterprise intro.)

It appears that The Orville got most of its inspiration from Voyager‘s intro, with a dash of DS9, and a lot of their own creativity. I don’t know about you, but I love The Orville’s new intro. Here are some photos for comparison. The graphics for The Orville are absolutely stunning and a joy to watch on TV:

This last shot, which is actually early on in the intro, feels like it’s paying homage to Voyager’s scene here:

When Voyager first aired, I was in love with the intro and thought it was the most beautiful one I had seen.

What do you think about the intros? Let us know in the poll below. 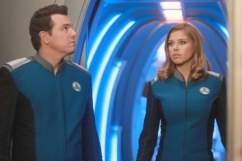