NBCUniversal The cast of This Is Us.

This Is Us, the first network drama nominated for the Outstanding Drama Emmy in six years, is riding high into the 2017 Emmy Awards. With less than two weeks to go before the season two premiere, Dan Fogelman’s NBC series is on the cusp of awards show glory. In fact, the show has already won an Emmy and earned three Golden Globe nominations earlier this year. In case you aren’t familiar with the show, now is the perfect time to meet the cast and climb aboard the bandwagon. There’s always room for any viewers looking for a show that makes you laugh, makes you cry and makes you value the importance of family like This Is Us.

The series tells the story of the Pearson family, from the past to today. In the past, Jack (Milo Ventimiglia) is struggling to be a good father and husband while Rebecca (Mandy Moore) grapples with putting her dreams of becoming a singer on hold to raise a family. We still have not learned how Jack died, although we do know it was after he and Rebecca broke up.

In the present, Jack and Rebecca’s children face their own challenges. Kate (Chrissy Metz) also has dreams of becoming a singer but is also trying to lose weight with the help of her fiance, Toby (Chris Sullivan). Kevin (Justin Hartley) is hoping to regain his dignity as an actor after he quit his silly sitcom job. At the end of season one, he was cast in a Ron Howard movie after the director saw his Off-Broadway play. He has also reconnected with his ex-wife Sophie (Alexandra Breckenridge).

Jack and Rebecca also adopted Randall (Sterling K. Brown) after they lost their third baby in the delivery room. Randall, who is black, has struggled with his own identity and searched for his biological father, William (Ron Cephas Jones). He found William shortly before his death, but it was just in time for Randall to introduce William to his two young daughters and his wife, Beth (Susan Kelechi Watson).

Now that you’re all caught up, meet the main cast of This Is Us.

Milo Ventimiglia was best known for playing Rocky Balboa’s son in 2006’s Rocky Balboa. Coincidentally, Sylvester Stallone will appear on This Is Us in season two, but will be working with Justin Hartley’s Kevin character though. Ventimiglia was nominated for the Lead Actor in a Drama Emmy. He also starred as Peter in Heroes and Jess on Gilmore Girls.

Singer Mandy Moore stars as Rebecca, a role that gives her plenty of opportunities to show off her singing skills. But she’s also giving an acclaimed acting performance as Rebecca and appears in both the past and present scenes. Moore was nominated for Best Actress in a Supporting Role in a Series at the Golden Globes.

Before This Is Us came around, the great Sterling K. Brown was best known to TV Audiences for his role on Lifetime’s long-running Army Wives. But 2016 was a breakout year for him, as he also played Christopher Darden in The People V. O.J. Simpson: American Crime Story. That role earned him an Emmy last year and an Golden Globe nomination. He’s up for Lead Actor in a Drama for This Is Us and should be favored to win.

Chrissy Metz only had small roles before This Is Us. In 2014 and 2015, she appeared in five episodes of American Horror Story as Ima ‘Barbara’ Wiggles. Kate is her biggest role to date. She was nominated for a Golden Globe and is up for Outstanding Supporting Actress at the Emmys.

Justin Hartley was Green Arrow on Smallville long before Stephen Amell on Arrow. But outside of Smallville and starring as Aquaman in an ill-fated pilot, Harley’s biggest roles were in soap operas before This Is Us. Hartley also appeared on Emily Owens M.D., Melissa & Joey and Revenge.

Susan Kelechi Watson has been acting on TV and in movies since 2004. Her breakthrough role came as Emma St. Claire on Third Watch. She also attracted fans by playing Louis C.K.’s ex-wife on Louie. She appeared as Ellie in episodes of The Blacklist as well. 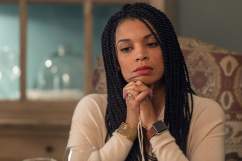 Susan Kelechi Watson as Beth on ‘This Is Us’: 5 Fast Facts You Need to Know

Chris Sullivan gained attention for playing ambulance driver Tom Cleary on Steven Soderbergh’s The Knick. He also appeared in the films The Drop, Imperium and Morgan. This past summer, he starred as Taserface in Guardians of the Galaxy, Vol. 2. Toby’s near-death was the major mid-season cliffhanger in season one, but he thankfully survived.

Ron Cephas Jones is a longtime theater actor who finally found his breakthrough TV role as William on This Is Us. The role earned him his first Emmy nomination. Although William died, he is expected to appear in season two. Jone also appeared in Netflix’s The Get Down and Marvel’s Luke Cage last year. He also played Romero on Mr. Robot.