Photo by: Ron Batzdorff/NBC Mandy Moore as Rebecca in This Is Us.

The second season of This Is Us is only a few days away, so the wait is almost over. It’s been a long summer for the Pearson family and the millions who watched their history unfold over the first 18 episodes of creator Dan Fogelman’s Emmy-winning drama. The second season debuts on Tuesday, September 26 at 9:00 p.m. ET. It’s the exact same timeslot the show had last year.

This Is Us won two Emmys earlier this month and was the first network drama nominated for Outstanding Drama Series in six years. Sterling K. Brown won for his incredible performance as Randall. Gerald McRaney won Outstanding Guest Actor for playing Dr. Nathan Katowski, the doctor who delivered the “Big Three.” Milo Ventimiglia, Ron Cephas Jones, Chrissy Metz, Denis O’Hare and Brian Tyree Henry were all nominated for their performances on the show.

For those who are just now climbing aboard the This Is Us bandwagon, first off, welcome aboard. We hope you brought a few extra boxes of tissues with you. Second, the show centers on the Pearson family, telling their story in the past and the present.

Photo by: Ron Batzdorff/NBCSterling K. Brown won an Emmy for his role in This Is Us.

In the past, we have seen the dissolution of the marriage between Rebecca (Mandy Moore) and Jack (Ventimiglia). The season finale “Moonshadow” ended without us learning how Jack died, so this will hopefully be answered soon.

In the present, their children – Kate (Metz), Kevin (Justin Harley) and the adopted Randall (Brown) – face their own challenges. Kate is hoping to become a singer, with the support of her fiance Toby (Chris Sullivan). Kevin just landed a role in a Ron Howard movie and his once-stalled acting career is looking up.

Randall and his wife Beth (Susan Kelechi Watson) have decided to adopt a baby. However, based on the first full scene released from Season Two, it doesn’t look like Beth is on board with the idea. They already have two young girls.

Eventually, we will learn how Jack died. Fogelman didn’t give anything away in his post-season interview with The Hollywood Reporter in March.

“In terms of the reveal of Jack’s death, the only balancing act we’re trying to be cognizant of is spacing it out in a way that is interesting for the audience and keeps people engaged and talking about it,” Fogleman explained. “But at the same point, not putting it to a place where it essentially becomes frustrating. That’s the balancing act we’re following.”

But once Jack dies, will Ventimiglia still be on the show? Considering how it plays with timelines, the answer is yes.

“Milo is No. 1 on the call sheet — he isn’t going anywhere,” Mandy Moore told People Magazine. “He is our leader. We call him our actor department head. If you want to know what’s going on in the show or have a question about something, Milo, without fail, has the answer.” 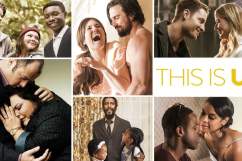 ‘This Is Us’ At The Emmys: Meet the Cast

Read More
NBC, This Is Us, TV
We only have a few days to go until the second season of This Is Us kicks off. Find out when the Pearson family is returning to NBC to break your hearts.