Country music star Troy Gentry was tragically killed in a helicopter crash on his way to a show at a New Jersey airport on Friday.

Gentry, half of the music duo Montgomery Gentry, was flying to play a show at the Flying W. Airport in Medford, New Jersey.

The crash reportedly occurred near the airport sometime around 1 p.m., and one other person in the aircraft was also killed, Lexington 18 News reported. The other half of Montgomery Gentry, Eddie Montgomery, wasn’t on board the helicopter.

Twisted metal and the rotor of the chopper could be seen near the airport where the crash took place as emergency personnel responded to the scene. It wasn’t immediately clear what led to the crash.

The band released an official statement on the matter, and it canceled its show scheduled hours after the crash took place.

Montgomery Gentry was in the midst of an American tour which was set to last through October. After playing the show in New Jersey, the duo was going to play at the Wayne County Fair in Wooster, Ohio before traveling to Pennsylvania. Those plans are obviously on hold as the band, fans and the country music industry grieves at the passing of one of its notable artists.

Here’s what you need to know about Gentry and his tragic death:

1. Gentry Leaves Behind a Wife & 2 Children

Gentry, 50, was a native of Lexington, Kentucky and is survived by his wife, Angie McClure, and his two children. He had daughter Kaylee with McClure and daughter Taylor with his ex-wife Kia.

According to The Boot, Gentry and McClure got married December 14, 1999 in Maui, Hawaii. Their marriage came just as his country music band was taking off.

Kaylee was born a few years later in 2002, and her birth was always something Gentry said he took pride in. During a interview with Nashville Parent, Gentry spoke about what being a father meant to him.

“I’ve grown up, I’m more responsible now,” he told the magazine. “Before children, the social scene was more important to me. Now, I’d rather be home with my family than out all night. Angie and I have date nights, of course. But I travel a lot for work, so I find comfort here at home.”

Gentry graduated from Lexington Community College and then attended the University of Kentucky, where he majored in marketing and business management. According to his IMDb page, his parents’ names are Lloyd and Pat, and he had two siblings, Jane and Keith. 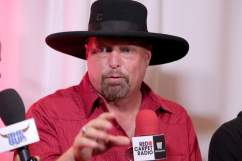 In 2014, as The Boot noted, McClure was diagnosed with breast cancer and Gentry tried to remain at her side for the duration. After her diagnosis, Gentry’s band launched a “Check Your Headlights” campaign to raise breast cancer awareness.

“Right before we launched, my beautiful Angie got a diagnosis from her doctor that has rocked our world a bit over the last few weeks,” Gentry wrote in a Facebook post. “She has breast cancer — and we wanted you to hear it from us first. She is currently going through chemo treatments, and her prognosis is very good. We’d love for you to keep her in your prayers over the next few months.”

McClure’s breast cancer was caught early enough where she is currently fine, but Gentry said it was an extremely difficult process for all involved.

“It’s devastating just to hear the word cancer,” he told The Boot. “But with today’s technologies, medicines, all that, and having the support of people who have defeated cancer, it’s great to have in your corner.” 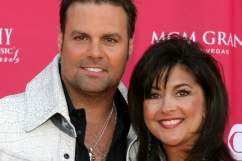 3. Montgomery & Gentry Started Playing Together at Shows During the 1990s

Before forming their band, both Gentry and McClure played in separate acts. Soon enough, though, they met and played shows with Montgomery’s brother, John Michael Montgomery, he told Country Rebel.

In 1994, Gentry was victorious in a singing competition sponsored by Jim Beam, called the Jim Bean National Talent Round Up.

Gentry and Montgomery continued playing shows together, but it wasn’t until Montgomery struggled to find a solo record deal that they formed Montgomery Gentry in 1999. The band quickly became known for its strong Southern rock influences. 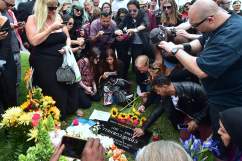 The duo of Montgomery Gentry released six studio albums during their run. Virtually all of those records produced songs that appeared on the Billboard Hot Country Songs charts.

They had a few No. 1 hits during their career, including “If You Ever Stop Loving Me,” “Something to Be Proud Of,” “Lucky Man,” “Back When I Knew It All,” and “Roll with Me.”

When they started playing in the band together back in 1999, they won Favorite New Artist at the American Music Awards. In addition to that, the band was named as the Duo of hte Year by both the Academy of Country Music and the Country Music Association in 2000.

Montgomery Gentry has been nominated for the same award every year since. In 2009, they were inducted into the Grand Ole Opry for their success.

Jerry Lewis Cause of Death: How Did the Comedian Die?

In 2006, Gentry came under first for killing a bear that was held in an enclosure in Minnesota. He claimed to authorities that he caught “Cubby” the bear in the wild, but it was later proven that he lied. He was charged with a felony for illegally killing the bear and received immense criticism from animal rights groups and various others.

The killing of the bear came to the surface when animal-rights group Showing Animals Respect and Kindness released a video showing Gentry killing the bear.

Gentry had apologized for the crime and spoke out in 2010 in a statement once the video came to light.

Four years ago, I was charged for illegally tagging and taking the hide of a bear across state lines. For that, I paid a 15,000 dollar fine, served a period of probation and gave up my rights to hunt and fish in the state of Minnesota for a period of five years. At the time, I apologized for the crime committed, but failed to apologize to the public for the unethical way the bear was taken.

There is no one who feels as bad about this as I do. I have beaten myself up about this over the years. I made a mistake, a bad decision, and it has been an embarrassment to both me and my family. I have learned my lesson, and have paid a huge price, both personally and professionally. Since this happened, I know in my heart that I am a different and better person.

I am not proud of what I did and I am truly sorry.