Tyler Alvarez is one of Hollywood’s up-and-coming young actors, and he’s bound to soar to stardom with his leading role on Netflix’s newest series, American Vandal, which is receiving rave reviews.

The show is a satire of a true crime docuseries, and follows Alvarez’s character, Peter Maldonado, as he attempts to uncover the mystery of who drew penises on 27 faculty members’ cars at his high school.

Read on to learn more about series star, Tyler Alvarez.

On American Vandal, Alvarez plays Peter, an aspiring sophomore documentarian who tries to get to the bottom of the mystery of who drew penises on 27 faculty members cars.

The show is already being described as one of Netflix’s best series to date, with the Hollywood Reporter saying it’s “surprisingly perceptive” as an examination of today’s teen culture.

The outlet praises Alvarez’s talents, writing, “… Alvarez gives a particularly impressive performance in his voiceover, adopting the cadence of professional documentarians yet letting certain teen biases slip through. (When he talks about a classmate who somehow got invited to a party he didn’t, his voice cracks just enough to hint at his anger and jealousy. It’s delightful.)”

2. He Stars in a New James Franco-Directed Film

Alvarez will next star in “The Pretenders”, a James Franco-directed film set to premiere in 2018. Alvarez acts opposite Juno Temple and Jane Levy in the movie, which is set in the 80s and follows two college friends who fall in love with the same girl. The movie chronicles the decade’s long love triangle between the three characters.

Alvarez was offered the role directly by Franco after working with him on the 2017 Lifetime movie, “High School Lover”.

3. He Plays Benny Mendoza on ‘Orange Is the New Black’

The young actor may seem familiar to OITNB fans, as he played Benny Mendoza on the Emmy-nominated series, Orange Is the New Black.

4. He Got His Start on Nickelodeon’s ‘Every Witch Way’

Alvarez first gained recognition after booking the series regular role of Diego Ruedo, an athlete with the power to control the elements, on Nickelodeon’s Every Witch Way. The series ran from 2014 to 2015.

Asked to describe his character to Tiger Beat ahead of the season 3 finale, Alvarez said, “Diego is a really funny, fun character. He’s one who just likes to have fun. He has a huge crush on Maddie and this season he’s all about her and trying to fight for her love and trying to prove to her that he likes her…”

5. He Is Currently Editing and Directing His First Feature Documentary

Alvarez’s interests in the movie industry have led to him exploring other behind-the-camera roles. He’s currently directing and editing his first feature documentary, which offers an in-depth look into those coping with Alzheimer’s disease. 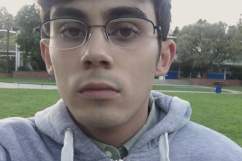 What Time Does ‘American Vandal’ Season 1 Become Available on Netflix?