Getty Bono and the Edge are seen playing a set in honor of the new iPod in 2004. (Getty)

U2 has cancelled its September 16 concert in St. Louis, Missouri after a night of unrest over a police officer’s acquittal that saw rocks thrown at officers, injuries, and arrests. The mayor’s house was damaged, and a public library’s windows smashed, among the other developments.

In the midst of all of this, U2 wrote on Saturday morning on Twitter: “Tonight’s St. Louis Show Cancelled ‘We cannot risk fans’ safety.”

The iconic band released a lengthy statement explaining the decision to no longer play at The Dome America Center. It was posted to U2’s website and reads:

Live Nation and U2 regrettably announce their St. Louis show scheduled for tonight, September 16, 2017 has been cancelled.

“We have been informed by the St. Louis Police Department that they are not in a position to provide the standard protection for our audience as would be expected for an event of this size.

We have also been informed that local crowd security personnel would not be at full capacity.

In light of this information, we cannot in good conscience risk our fans’ safety by proceeding with tonight’s concert. As much as we regret having to cancel, we feel it is the only acceptable course of action in the current environment.” – Live Nation and U2

Fans who purchased tickets online will receive a refund on the credit card tickets were ordered on. Refunds for non-internet purchases will be available starting Monday at 10am at point of purchase.

Here’s some of the reaction on Twitter. Some people expressed sadness, others said they were angry (at those causing the unrest, at U2), and others wanted the band to make a social statement.

@U2 pleeeeeease come back to St. Louis!! We're devastated to miss this tour!!!

On the other hand….wouldn't U2 be the perfect band to play in St. Louis right now…?

Hi @U2. This would be an excellent time to publicly support racial justice & call out police oppression in St Louis.

The concert being cancelled upset fans on social media, but it was just one of multiple closings in St. Louis because of riots and protests over a judge’s acquittal of a white police officer in the shooting death of an African-American man, Anthony Lamar Smith. Prosecutors had argued that the former police officer, Jason Stockley, planted a gun after the shooting, something he denied. 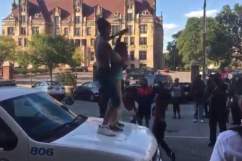