Season 5 of 90 Day Fiance is here, with a new cast of couples, along with some familiar faces as well. Get the rundown on each of the couples below.

Nicole and Azan are familiar faces on the series, but now Nicole has brought her young daughter named May into the mix. She’s hoping to bring Azan to America and would like him to step up as a father figure for her daughter. One issue is that Nicole needs her skeptical father to co-sponsor the K-1 visa, according to TLC.

The couple met last season on the show.

These two met on a dating app and Andrei was living in Dublin when the two began talking. Elizabeth says she loves Andrei with all her heart, but that he is also a “classic alpha male”. Even so, Elizabeth insists that Andrei treats her better than any American man has ever treated her in the past.

When it comes to Evelyn’s friends, they think she’s definitely moving to quickly in her relationship. She is a bit younger than David and she says he is the first man she has ever really loved. Evelyn said when she first saw him, it was practically love at first site. David lives in Granada and that is where David proposed.

Molly comes from a conservative background and her father worries about Luis’ intentions. Molly said she met Luis in the Dominican Republic and that he said to her, “I’m going to marry you. You’re going to be my wife.” She says that even though she has two daughters, she never really thought that marriage was for her … until maybe now.

This couple met on a dating app and when Josh went to see her in the Philippines, he said that he was only there 5 days before popping the question to her. But, when the season starts, it looks like Josh has not given Aika a ring … yet. 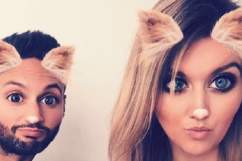 Antonio & Cortney on ’90 Day Fiance: Before the 90 Days’ Cast: Are They Still Together?