After over 13 years, one of Maynard James Keenan‘s bands is coming out with new music. But it’s not the new Tool album that fans have long anticipated. Instead, A Perfect Circle teased a new album called The Doomed on social media Friday. A release date hasn’t yet been revealed, but it’s expected to come out sometime in 2018. Keenan has posted on social media previously using the hashtag #APC2018 as it nears a fall tour, and band members have previously stated it would come out near the beginning of 2018.

The Doomed would be the band’s first studio album since the November 2, 2004 release of Emotive. In past social media posts, Keenan and band mate Billy Howerdel said the process of writing the new album was tedious, adding that several factors made it difficult. They previously said a full album was unlikely and were expected to release single songs instead. A Perfect Circle subsequently released a new song, “By and Down,” which it performed at shows on its tours starting in 2012.

A Perfect Circle is about to start its fall tour, with the first show scheduled for October 21 in Sacramento, California at Aftershock Festival. The tour through the United States and Canada wraps up December 4 in Eugene, Oregon.

It’s expected that the band would tour extensively in 2018, accompanying the new album’s release. Those details haven’t yet been revealed.

The new A Perfect Circle release comes at the chagrin of many Tool fans. For years, the band has teased new music coming soon, and they’ve offered updates on the writing process, which has moved extremely slow. Despite the teasers, though, Tool band hasn’t released new music since the 2006 release of 10,000 Days. Over the past few years, Keenan has opted to focus much of his time with his third project, Puscifer. 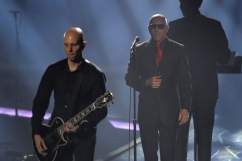 Read More
Breaking News, Entertainment, Music
According to a social media post, A Perfect Circle will be coming out with a new album titled "The Doomed." Its release date isn't yet known.