Alaskan Bush People‘s Noah Brown has confirmed what many fans have speculated for several months: He is engaged to his girlfriend, Rhain. According to InTouch Weekly. Brown took to Facebook on Saturday night, posting a photo of his fiancee blowing kisses and making their engagement announcement in the caption.

“Rhain Alisha has been so patient and supporting [me] through everything that has been happening, my mothers cancer, having to leave Alaska, my car keeps breaking down, and all in all I have been thinking of how thankful I am that she moved in with [me] instead of going back to Oregon and now we are engaged and planning our life together. Rhain Alisha is everything I could have ever wanted, she is my soulmate, my angel, my dream girl, she makes me the best version of myself. I know that as long as she loves me that someday I can be the man that Rhain deserves. Thank you, God, for giving me Rhain Alisha Merrill,” reads the Facebook post.

Rhain, who legally changed her name from Ruth, has received mixed feelings from Alaskan Bush People fans. The 26 year old was on an earlier episode of the popular Discovery Channel show. Some ABP fans seem to think that Rhain purposely went to Alaska to meet one of the Brown boys because she wanted a big of fame and fortune, which made some fans of the show question her intentions from the very beginning.

In recent months, fans have been upset with Brown because he hasn’t spent a great deal of time by his mother’s side. Ami Brown has been battling lung cancer — and some fans blame Rhain for Noah’s absence. The Brown family has not given an update on Ami’s health, but it has been reported that she is out of the hospital and that she has finished chemotherapy. While her prognosis isn’t good, Ami is said to be hanging on. 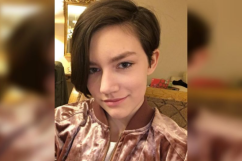