I asked…she said yes! …And we lived happily ever after?

John Stamos, 54, is officially off the market, as he has announced his engagement to girlfriend Caitlin McHugh, 31. The couple began dating approximately one year ago and Stamos has not been shy about gushing over his love during talk show appearances over the course of their relationship. In fact, People previously reported that Stamos even revealed he was dating McHugh during an appearance on morning show The View in March 2016. Get to know more about McHugh and Stamos’ love life in our 5 Fast Facts below.

1. The Couple Are Huge Disney Fans, So It Was Incorporated Into the Proposal

I’ll always be the #Mickey to his…..whatever he feels like wearing ? Day 5: #Mickeystyle !! Here’s a Mickey #disneybound #tbt @disneystyle Clothing from @uniquevintage Shoes are the @Disney @vans line #fallintodisneystyle #disneystyle

It’s safe to say that both Stamos and McHugh are huge Disney fans. McHugh’s Instagram account is flooded with tributes to Disney characters and she has countless photos in Disney attire. She even has had photo shoots for Disney Style, which keeps Disney fans up to date with the latest news, Disney garb and DIY ideas. From onesies to shoes, to entire outfits, McHugh is not shy about donning Disney-inspired looks on a daily basis. And, there are several photos of her visiting Disneyland with her man, John Stamos. They two even rode down Splash Mountain with the creator of the Disneyland ride, Tony Baxter.

Stamos actually stated on talk show The View that his girlfriend loves the song “Disney Girls.” But, McHugh is not the only Disney fan in the relationship. In fact, Good Morning America has revealed that Stamos even has the original “D” from the Disney sign in his yard.

With that said, it makes sense that Stamos would announce his engagement to McHugh with a cartoon photo of the two of them in front of the iconic Disney castle.

Stamos isn’t the only actor in the relationship, as McHugh is a model and an actress. Some of McHugh’s acting credits include the movies I Am Legend and 48 Hours to Live, along with TV spots on shows including The Vampire Diaries, Switched at Birth, Castle and Law & Order: SVU. In fact, McHugh actually appeared on the same 2011 Law & Order: SVU episode that Stamos was on, as reported by E! News.

In an interview with Entertainment Tonight, McHugh gushed about her man, saying he is very supportive of any decisions she makes with her career. In addition, the two have even worked on a short film together. McHugh dished that:

They say if you can do a film together, you can do anything together. I’m very happy to say we survived the filming process and we’re in editing now. We’re both still alive so it’s great!

The project that the couple worked on together is called Ingenueish and McHugh described the short film as this:

It’s actually about being an actor in L.A. It’s basically kind of a roast of myself, the whole thing. [John] directed it, I’m in it, we wrote it together and we had a lot of fun doing it. Josh Peck helped us out with it too and Brittany Furlan … she’s in it too.

3. The Couple Generally Likes to Keep Their Relationship Private

I'll be Prince Eric to your Ariel any ol' time. ❤ @caitlinskybound #disneybound

McHugh told Entertainment Tonight that an ideal date night for the couple is when Stamos cooks dinner for her and they spend the night at home. She also explained that she and her man like to keep their relationship private. McHugh revealed:

We like to keep our lives private because we’ve seen what relationships in the public eye can be like and we just like our privacy … We don’t want the commentary from the masses about what our relationship is or should be. We’re very happy together and we hope to be so for a long time.

4. McHugh Is a Martial Artist

According to ET Online, McHugh is actually a martial artist, so it’s no wonder she would love to be involved with an action film. She explained:

I would love [to work for] Marvel. Star Wars, if we’re talking dreams. [And be able to play] a strong woman who’s not on the sidelines trying to get saved, kicking-ass and taking numbers!

5. This Will Be Stamos’ Second Marriage

John Stamos was previously married to model Rebecca Romijn from 1998-2005, with their marriage ending in divorce. Romijn went on to marry and have children with actor Jerry O’Connell. And, this was joked about to Stamos during the roast of Stamos’ dear friend Bob Saget, when Jeffrey Ross joked, “You lost your wife to the fat kid from Stand By Me.” As a child, O’Connell appeared in the movie Stand By Me, alongside Corey Feldman, River Phoenix and Kiefer Sutherland.

When Stamos split from ex-wife Romijn there were rumors that the break up was because Stamos did not want to have children.

Stamos has been one of the most sought-after men in Hollywood over the years and has been romantically linked to his fair share of hot actresses. WhosDatedWho has reported that he dated Denise Richards and Marlee Matlin. Many fans often wondered why Stamos never got together with his Full House TV wife, played by the beautiful Lori Loughlin. In an interview with Huffington Post Live, Loughlin revealed:

I was actually married at the time that I was doing the show and then I got divorced. And then when I got divorced, [John] met Rebecca Romijn and he got married, so our timing was just really off.

Daily Mail also revealed that Stamos said he did go on one date with Loughlin when they were very young. He stated:

[We] went on a date to Disneyland before, you know, before we were both married. In real life, when we were 18, 19-years-old.

Stamos said that he and Loughlin are very close friends today. 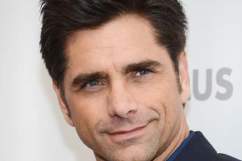