UPDATE: Good news fans! Chesapeake Shores has been renewed for Season 3! Hallmark announced during the Television Critics Association winter event in January that yes they are renewing the show. Chesapeake Shores will get a third season this year. We’ll likely see 10 more episodes, and we absolutely can’t wait. As of June 16, a premiere date has been announced. Chesapeake Shores returns on August 5, 2018.

ORIGINAL STORY: Hallmark fans have absolutely adored this season of Chesapeake Shores. And although the season must end (and make room for all the great Hallmark Christmas movies), we’re still going to miss this heartwarming show while it’s gone. Has the show been renewed for Season 3? How long will we have to wait until it returns? Find out all the details and then, when you finish this article, take the poll at the end and let us know if you’d like to see a third season of Chesapeake Shores.

As of the time of publication, the Hallmark Channel has not announced if it will renew Chesapeake Shores or not. But this isn’t a huge surprise and not a reason to worry. Hallmark didn’t announce that it had renewed Chesapeake Shores for Season 2 until the middle of January 2017. So we may not hear about Season 3 until January again.

The first season of Chesapeake Shores was the most-watched show in Hallmark Channel history for key demographics, so it’s tough to imagine they won’t renew it for a third season. In addition, the ratings for season 2 are great so far. The show currently has an IMDB rating of 7.8 out of 10. And it was averaging about 1.8 million viewers per episode in Season 2, similar to Season 1. The Season 2 finale premiered with 1.8 million viewers, and episode 9 actually increased with 1.9 million viewers. So it’s really tough to imagine Hallmark won’t be renewing this series.

Now let us know what you think. Should Chesapeake Shores be renewed? 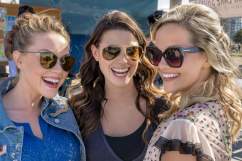