Tatum, you are my heart. So glad you were there to see @SharnaBurgess and I dance for you! ❤️❤️

Tonight’s theme on Dancing With the Stars was “Most Memorable Year”, with each of the celebrity contestants sharing special moments in their lives. Unfortunately, after an emotional episode, filled with heart break, love and acceptance, one couple had to be eliminated. And the couple going home was … Derek Fisher and Sharna Burgess.

And the first couple in jeopardy was revealed to be Nick Lachey and Peta Murgatroyd, followed by Derek Fisher and Sharna Burgess. Upon hearing he was leaving the show, Fisher said that he has achieved growth from being on the show. And Burgess couldn’t help but gush over Fisher, saying how proud of him she has been.

Tonight’s elimination was based on the last two episode’s worth of scores.

Earlier in the evening, the first 10’s of the season were given out, as Jordan Fisher attained a 29 out of 30 with pro partner Lindsay Arnold. His performance was dedicated to his grandparents, who adopted him. Other emotional performances tonight included Nikki Bella’s reflection on her neck injury, Lindsey Stirling’s losing her father to cancer, Derek Fisher’s daughter’s cancer battle and Jesse Muniz’s memory loss. Victoria Arlen became very emotional when she performed, showing the story of her triumph over paralysis. She even incorporated a wheelchair in her performance.

Victoria Arlen and Val Chmerkovskiy – Foxtrot – “I Lived” by OneRepublic 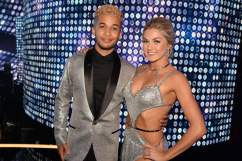 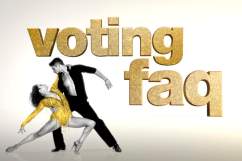