It’s actually a lot earlier in the apocalypse than you might think.

(Minor spoilers through Season 3 Episode 14 of Fear the Walking Dead.)

The crossover was revealed by Robert Kirkman during the New York Comic Con Fear the Walking Dead panel. He revealed that the two shows will cross over into each other’s continuities via one shared character. He didn’t specify which character, or which show the crossover will take place in. But ever since the reveal, fans have been trying to pin down where Fear falls in TWD timeline.

It’s tough to know exactly, but we have some good hints. We know that the pilot of Fear took place to coincide with the beginning of the global outbreak. We also know that in The Walking Dead, Rick woke up about four to five weeks after the outbreak, according to Robert Kirkman. In fact, showrunner Dave Erickson said that Fear started right around the time Rick was shot and fell into a coma.

By the end of the first half of Season 2 of Fear the Walking Dead, we were getting “very close” to the time that Rick woke up in Georgia, Erickson said.

So by now, we should be right around the time that Rick’s waking up or even past that point. In fact, one Fear the Walking Dead fan posted on Reddit three months ago that we were right at the time that Rick was waking up, according to their calculations. According to the fan’s timeline, the day that Madison offered to go with Troy to investigate the outpost was around Day 41.

It seems like Fear should be further into the apocalypse than just about two months. But when the world ends and everything falls apart, things tend to change very fast. 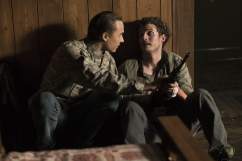