Proctor John is appearing for the first time on Fear the Walking Dead tonight. Here’s everything we know about Proctor John. (This post will be updated after the episode airs.)

Up to this point, Proctor John has been a mysterious character that we’ve never seen. We only know that he runs El Bazar (aka The Bazaar) and stays in the shadows. He has a lot of power, people are afraid of him, and he has many other proctors who answer to him. The only other thing we know about this mysterious character is that he lived in Mexicali, Baja California before the outbreak.

When Madison and Walker were trying to strike their initial water deal at El Bazar (before meeting Daniel), Victor got into a brawl at a gambling table. Seeing this and realizing Madison was connected to Strand, the trader mentioned that Proctor John ran The Bazaar and seemed concerned about doing anything to cross him. Victor owed a lot of money to Proctor John, and was ultimately chained up outside the Bazaar to fight zombies because he couldn’t pay his debts. Madison paid off his debts for him, getting him released, so he could lead her and Walker to the dam.

More recently, in El Matadero, Victor went on a search for Proctor John. He found John’s goons and told them that he had something that John wanted. It was unclear what that was, but it will likely play a big role in the Season 3 finale.

We’ve seen other proctors on the show this season. One of them is Proctor Nineteen.  El Bazaar (aka The Bazaar) has a number of proctors, all whom answer to Proctor John. In the Season 3 episode The Diviner, we met Proctor Nineteen (played by Brian Duffy.) He was one of the Proctors who arrested Strand when he couldn’t pay his debt. He took Strand to the holding area where he was instructed to wait for his work duties. He and another Proctor were also the ones who shot down zombies and released Strand after Madison paid his debts. He was also one of the proctors who talked to Strand when he returned and said he had something that Proctor John wanted.

For the two back-to-back finale episodes, IMDB lists actor Travis Johns as playing Proctor Nine. We haven’t seen Proctor Nine before, and there’s some speculation that this is a placeholder name for Proctor John. Travis Johns has a long list of acting credits to his name. He has been on The Mick, Rebel, Chance, Westworld, The Last Ship, Rizzoli & Isles, Queen of the South, Criminal Minds, Agent X, The Younger and the Restless, Agent Carter, Flashforward, and The Closer. Most of the time, these were one-episode-only appearances or unnamed characters. But on Days of Our Lives in 2006-2007, he played Officer Jones and “Island Cop” for several consecutive episodes. He has also directed two short films and wrote two short films.

Madison tried to meet with Proctor John before, but she wasn’t allowed a face-to-face.

It’s unclear what’s going to happen to bring Proctor John out into the open, but it’s going to be interesting. 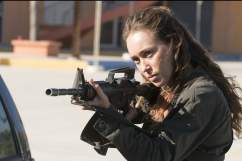