Mike Shouhed’s relationship with Jessica Parido was documented from the very beginning on Shahs of Sunset. Fans saw the ex-couple date, get engaged, marry and divorce. This season, Shouhed signed his divorce papers, but in upcoming episodes of the show, the two are believed to be “hooking up”. On tonight’s episode, Shouhed is put in the hot seat about his relationship with ex Parido and an Instagram photo of his is put on blast. The actual pic is below and in the background, Parido appears to be present, hanging out in Shouhed’s home.

According to The Inquistr, Parido denies getting together with Shouhed, at least in NYC, where tonight’s episode was filmed. She was reported to be dating celebrity jeweler Greg Yuna, aka Mr. Flawless, who Shouhed has said is a friend of his as well. Days before last week’s episode aired, Parido posted a photo of herself with Mr. Flawless on her Instagram account. Check out the pic below.

In online comments, Parido denies being in NYC and says that Mr. Flawless and Shouhed are not friends. Parido also says that she has not filmed any footage for season 6 of Shahs.

The ex-couple married in March 2015 but split up just five months later after Shouhed admitted to cheating on Parido. She filed for divorce in November 2015, citing irreconcilable differences. A few of Shouhed’s co-stars from Shahs talked to The Daily Dish about their thoughts on Shouhed’s divorce when the couple broke up. Reza Farahan stated:

It is sad. It has been sad, but Mike also ignored a lot of the warning signs and he did a lot of things he shouldn’t have done. But he wasn’t aware and present, so he got caught up in it and then, obviously, he’s suffering the ramifications of all that.

Mike and Jessica’s love was like this storybook romance and I am such a sucker for romance that when I saw what they were going through, I thought I took everything as real and authentic. It did not occur to me at the time that Mike was going too fast and that he wasn’t ready, but that’s what it ended up being. Jessica wanted to be a wife … And Mike wasn’t ready. 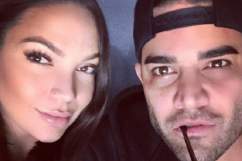 Read More
Reality TV, Shahs Of Sunset, TV
Mike Shouhed and ex-wife Jessica Parido were believed to be hooking up on this season of Shahs of Sunset.