Kaya Jones was once a member of the Pussycat Dolls. Years after leaving the girl group, Jones has taken to social media to make some bold claims about the group, claiming that it was a secret prostitution ring.

The Pussycat Dolls were a highly-successful girl group. They sold 53 million records worldwide before their breakup back in 2010, according to the Daily Mail.

Jones, 33, took to social media to make her claims amidst the Harvey Weinstein scandal. In a series of tweets from October 13 through October 15, Jones made it clear that she was going to speak her truth.

You can see her first few tweets making the prostitution ring claims below.

The children you messed with that survived the abuse, we are adults now.Are you ready old ones to fight?Cause you all are looking mighty old

My truth.I wasn’t in a girl group. I was in a prostitution ring.Oh & we happened to sing & be famous. While everyone who owned us made the $

Jones also sat down for an interview with Info Wars in which she said that she and the other girls that were in the Pussycat Dolls were encouraged to “sleep with an executive.”

“Executives, and managers, and agents, and other artists that are on the label, if you don’t want to sleep with an executive they’ll pass you to that. Or sometimes they just continue to pass the girl, so she’s just passed around,” she said.

You can hear the interview in the video below.

The group’s founder, Robin Antin, has responded to Jones’ bold statements. Antin told The Blast that Jones’ claims are “disgusting, ridiculous lies,” and  said that Jones is “clearly looking for her 15 minutes.” The Blast also said that legal action against Jones may be taken.

“Sources close to The Pussycat Dolls tell us the group’s lawyer has been contacted and is drafting a legal letter to send to Jones warning her to stop spreading lies and damaging the brand, or face the legal consequences.”

2. Jones Was Discovered by R. Kelly & Joined the Pussycat Dolls in 2003

Jones was first discovered by R. Kelly and inked a deal with his record label when she was just 13 years old. In three years time, Jones signed with Capitol Records. A short while later, she auditioned for the Pussycat Dolls and ended up being selected to join the girl group.

“When everyone is not on the same page it affects the group so that I think was the worst part and I decided to leave. It was not because I wanted to be solo and I didn’t want to be in a group anymore, I left because it stopped being enjoyable, it stopped being fun,” Jones told Yahoo! Singapore in 2012.

Jones went on to be a solo recording artist and has released a couple of singles like “Hollywood Doll” and “Take It Off.”

3. Jones Is from Las Vegas & Was Heartbroken over the Massacre that Took Place Earlier this Month

Although she was born in Toronto, Ontario, Canada, Jones grew up in Las Vegas and has called Sin City home for most of her life. She was completely heartbroken after a man by the name of Stephen Paddock opened fire from his hotel room on the 32nd floor of the Mandalay Bay hotel, claiming the lives of 58 people and injuring hundreds of others.

“It’s hard for my mind to process the senseless acts only moments later done to innocent people. I’m proud for one thing. We were united and happy this night. We all sang & were connected. Terror can’t take that away. God bless the lives taken & all the survivors,” Kaya wrote in an Instagram post a couple of days after the Las Vegas concert shooting.

4. Jones Released Her Version of the National Anthem & Donates 100 Percent of the Proceeds to Help Veterans

Jones released her version of the National Anthem in September and decided that all of the proceeds would be donated to a charity that helps veterans.

“100% of all sales are going to the 14th Hour Foundation. Thank you and God bless. I Stand for the anthem, kneel for the cross,” Jones wrote on Facebook last month.

“The 14th Hour Foundation is committed to raising and dispersing funds to help the lives and futures of Veterans, Military Contractor Personnel and First Responders that have served and sacrificed to protect the American Homeland. Proceeds from this charitable fund provide assistance in the form of a Honor Grants for those unexpected everyday life events that other government programs may not cover. These may include, utility bills, help with rent, a vehicle repair, burial costs and help with college tuition. Additionally, the 14th Hour Foundation partners with other veteran organizations to increase awareness of veteran-related issues and to provide for veteran support services,” reads the organization’s website.

Below is a video of Jones singing the National Anthem.

This past August, Jones did an interview with Breitbart News Saturday.

“We ended up doing 20 shows in 10 days, and I just really bonded and connected with [the soldiers]. It’s heavy work… You really understand what they go through. They sacrifice a lot, no only the ones who serve and go away, but also the ones at home, who keep the home front normal. And I just felt that the spouses’ point of view is never really seen, what they go through. It’s really hard for the wives and the girlfriends, and the families,” she said.

5. Jones Is a Proud Trump Supporter

#MAGA – 100% behind our nation & our president @realdonaldtrump thank you @students4trump @miafaithchamberlain for this fantastic idea! Follow and support our movement!!! Photo by the wonderful and super talented @johnnyvacar http://johnnyvacar.com #Kaya #KayaJones #America #Students4Trump #NewYork #NYC ????❤️

In recent months, Jones has not been shy about her feelings on President Donald Trump. Back in February, she posed a photo of herself wearing a “Make America Great Again” t-shirt on Instagram.

“The shirt I never was able to wear in fear of being attacked. My friends @joyvilla @officialandresoriano changed that for me and 60 million other Americans at the #Grammys. Thank you! Stand up for what you believe in! In the name of love. In honor of your strength you’ve given me the strength to say let’s change the narrative,” Jones captioned the photo. 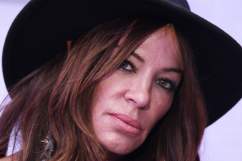 Read More
5 Fast Facts, Celebrities, Music, Prostitution
Kaya Jones claims that the Pussycat Dolls was a prostitution ring. Here is everything you need to know about her.