Multiple women have come forward with sexual harassment allegations against Hollywood producer Harvey Weinstein. The bombshell accusations were reported by The New York Times and involved various actresses and employees.

The Times report cites actress Ashley Judd‘s encounter with Weinstein. She claims the producer once invited her to a hotel for what she thought was a breakfast meeting. Instead of the meeting, though, Judd said she was invited upstairs to Weinstein’s room, where he was wearing only a bathrobe. He allegedly asked her if he could give her a massage or she could watch him shower.

“How do I get out of the room as fast as possible without alienating Harvey Weinstein?” Judd remembered thinking during an interview with the newspaper.

That incident took place 20 years ago, Judd said, and a separate 2014 incident involved a former temporary employee, Emily Nestor. After working for him for only one day, Weinstein allegedly told Nestor he’d “boost her career” if she were to have sex with him, she reportedly told colleagues.

Another accusation came from 39-year-old Lauren Sivan. She was an anchor on Long Island 12, a cable channel in New York at the time and came forward with her story of Weinstein’s advances to Yashar Ali of The Huffington Post.

In Ali’s article, Sivan spoke of an incident 10 years ago where Weinstein masturbated in front of her.

In her recent career, Sivan worked as a anchor and contributor to the show “Red Eye” on Fox News Channel and was also an anchor at the company.

Here’s what you need to know about Sivan and her allegations against Weinstein:

1. Sivan Alleges Weinstein Trapped her in a Restaurant Kitchen & Masturbated in front of her

Sivan said she went with others to Cipriani, a popular Italian restaurant in Manhattan, and met with Weinstein. After eating together, the group went to a Cuban-themed club/restaurant called Socialista. Weinstein was an investor in the business at the time, and the group congregated in the club area. At one point, Weinstein allegedly asked Sivan if she wanted to go on a tour of the restaurant. She “reluctantly agreed” and went downstairs alone with Weinstein, telling her friend to come check on her if she didn’t return in 10 minutes.

Once downstairs in the restaurant, Weinstein and Sivan made small talk as they walked into the kitchen. With the restaurant closed at the time,Weinstein leaned in for a kiss, Sivan told Ali. She said that she rejected the kiss, telling Weinstein that she had a serious boyfriend.

“Well, can you just stand there and shut up?” Weinstein allegedly asked Sivan.

Yeah. This happened??luckily I didn't need a job or favor from him + didn't have to be polite. Others did. Keep that in mind. https://t.co/mXs2RIU5kU

Sivan said that Weinstein ejaculated into a potted plant nearby, and her friend came looking for her but was at first halted by a security guard. She ended up getting to the lower level and greeted the pair as they left the kitchen.

The Weinstein Company and Weinstein’s attorney, Lisa Bloom, didn’t provide comment to Ali for his story when requested.

On October 7, The Weinstein Company announced Weinstein was going on “indefinite leave” while the sexual harassment allegations are investigated.

2. Sivan Alleges Weinstein Called Her the Next Day & Told Her He Had a ‘Great Time’

Sivan said that she briefly told her friend what happened afterward, but ultimately remained quiet about it because she was in a long-term relationship and was intimidated by Weinstein’s media power. She told Ali that Weinstein called her at her office the next day while working and asked her out once more.

Weinstein told her that he ‘had a great time last night’ during the phone conversation, the article alleges. Weinstein then allegedly asked her if she wanted to get together again once he returned from an out-of-the-country trip. She said she responded by saying no, reminding him that she was in a relationship. According to Sivan, she hasn’t had any communication with Weinstein since the alleged incident took place in 2007. 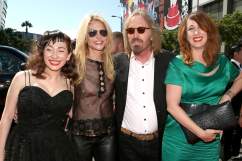 According to Sivan’s LinkedIn page, she graduated from George Washington University in 2000 with a bachelor’s degree in journalism and political science. One of Sivan’s first jobs was for WETM-18 News in 2003. After working there and also for a number of local media companies, Sivan was offered a contributor role to Fox News Channel’s “Red Eye” in 2008. She also worked as an on-air anchor at the news network.

In 2010, Sivan went back to school at Long Island University. She earned her master’s degree in homeland security, law enforcement, firefighting and related protective services in 2011, her LinkedIn said. Also in 2010, she started working as an anchor/reporter for News12 Networks.

One year later, Sivan got a job at KTTV Fox 11 in Los Angeles, where she works as an anchor/reporter.

4. Sivan Was Once Engaged to Fox News Channel’s Rick Leventhal

A 2005 article by New York Post’s Page Six said that Sivan had been dating Rick Leventhal, a Fox News Channel reporter at the time. Sometime during the year, he asked Sivan to marry him, and they subsequently made had plans to get married in February 2006, the publication noted.

However, the marriage between the two was postponed and never came. They split up, and the exact reason why wasn’t immediately known, according to FTV Live. It’s not clear if Sivan is currently in a relationship.

5. Sivan Has Had Several Interesting Interactions While Working as a Reporter/Anchor

In her time as an anchor/reporter, Sivan has had several interesting appearances. In 2015, Jimmy Kimmel featured Sivan on his late night talk show.

During an interview while she working at KTLA, Sivan was tasked with speaking to people and asking them the best ways to beat the heat during the summer. Sivan came across a man at a dog park who said he thought people were “too much into” air conditioning.

“If you go back 20, 40 years, not so many people had air conditioning, it’s more a new thing,” the man said. “Think about 100 years ago, who turned on the air conditioning then?”

“Yeah, but they were so sweaty, they probably didn’t look pretty 100 years ago,” Sivan answers. “I like to be refrigerated.”

The man catches Sivan — and viewers — off guard with his candid response.

“I like to smell your sweat,” he said unexpectedly.

Sivan breaks into laughter and says she “did not see that coming.”

She also had another incident in 2015 when speaking about then-Speaker of the House John Boehner, who had just announced his intention to resign. While on the anchor’s desk, Sivan was supposed to read his name off the teleprompter, and did so. However, she suffered from a slip of the tongue, mispronouncing the former congressman’s name the one way you’re not supposed to.

Check out the video of the on-air incident by clicking here.