Tonight is week 2 of The Voice blind auditions, with a new round of contestants performing in hopes of winning the attention of the judges. For her audition, contestant Moriah Formica blows away the judges with a performance of the song “Crazy On You.” Along with her singing, Formica shows off her guitar skills as well.

Coach Miley Cyrus was the first to turn her chair around and she was later followed by the other judges. And, with a voice beyond her years, Formica is just 16 years old. Levine called her a “pint-size powerhouse.” Jennifer Hudson then said that Formica proves why age does not matter. All four judges fought over Formica in hopes that she would join their team.

When it comes to Formica’s guitar playing, her father Josh told the Times Union:

She played Guitar Hero for hours after kindergarten then asked me for a real guitar and taught herself how to play it.

Once her parents found out she could sing, they supported their daughter, eventually enrolling her in a school called Modern Day Music, which arranged for Formica to sing gigs at festivals and other venues. 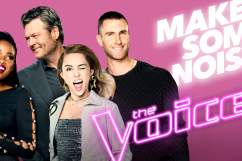 Read More
Reality TV, The Voice, TV
Moriah Formica is a contestant on The Voice season 13. Check out the details on Formica, along with her blind audition.