Now that season 3 of Mr. Robot is airing tonight, you may need a little catching up on the major questions and unresolved theories we were left with when Season 2 ended. Here are the top mysteries and theories you won’t want to forget.

Why Are Tyrell & Elliot So Close? Exactly Who Is Tyrell?

After the way Season 2 Episode 11 ended, fans were left wondering if Tyrell was real or if he was just an alter of Elliot’s. And even partway through Episode 12, when Mr. Robot, Elliot, and Tyrell were standing together in the building across from E-Corp, we thought that surely Tyrell was another alter. But then Tyrell shot Elliot. When Angela later answered the phone and addressed Tyrell, that was the show’s way of letting the audience know that Tyrell was real and alive. His existence in the “real” world was also confirmed earlier when he was on the FBI evidence board.

We also know now that Tyrell and Elliot are close. Elliot wanted to stop the others from blowing up the E-Corp building and killing innocent people. To stop Elliot from killing the hack, Tyrell shot Elliot. He had tears in his eyes while he was doing it.

Tyrell was still in tears when he was talking to Angela and said that he loved Elliot. This was more than just a man who worked with Elliot on a plan to gain power. These two have some type of deep connection that Elliot has forgotten.

A top fan theory is that Elliot and Tyrell go way back. Perhaps Tyrell is also family. Or a best friend that Elliot has forgotten. But somehow, Elliot and Tyrell are connected. (One theory being tossed around is how crazy it would be if Tyrell was actually Elliot’s real dad. That’s not too likely, considering the age of his wife and family. And even though Elliot doesn’t trust what he sees, which means Tyrell could actually look completely different from what we’re seeing, his photo is the same on the FBI evidence board. So the Tyrell we’ve been seeing really is Tyrell Wellick.)

Was the Building Blown Up for the Stage 2 Plan?

When Season 2 ended, we finally found out what Stage 2 is: the destruction of the paper backups of E-Corp. These backups were going to let E-Corp get things back to normal after the major hack at the end of Season 1. But destroying those backups involves another hack that will ultimately destroy the E-Corp building and likely kill a lot of innocent people. Mr. Robot put all this together. He’s at the center of the plan. But Elliot doesn’t want innocents killed and was ready to pull the plug. Tyrell, however, was going to have none of that, so he shot Elliot. Although Tyrell may have been brought into the plan by Elliot/Mr. Robot, he was going to make sure the plan was carried out. Stage 2 is a collaborative effort among the Dark Army/Whiterose, Angela, Mr. Robot, and Tyrell.

Why Did Elliot Have to See Angela?

"Now there are choices that have to be made, and she has to face the consequences of those choices." @samesmail on Angela pic.twitter.com/YiNx2pcsHS

Near the end of Season 2, Angela said that she loved Elliot too and that she would need to be the first face Elliot saw when he woke up. Why? Some fans think that Angela is behind everything and running things behind the scenes. But more likely, she was brought in on the plan when she met with Whiterose and seemed so completely changed (almost converted) after their meeting. Maybe Mr. Robot is in on this plan too, even if Elliot isn’t. When Elliot wakes up, he may have a tough time dealing with knowing that building was blown up (which it likely will have been by that time.) So he’ll need Angela to talk him down. And maybe he’ll also need to see Angela so he knows she didn’t die in the explosion.

And Why Did Angela Seem So ‘Converted’?

"In Season 3, you will see Angela playing multiple sides and what the consequences of that are." — @PortiaDd pic.twitter.com/fcQPWej75S

After Angela met with Whiterose, her demeanor and her actions completely changed. It seemed like she had a conversion of some sort. Why? What happened to change her mind so completely?

Does Elliot Have Other Alters?

Some fans think Elliot has other alters besides Mr. Robot. The FBI evidence board from Season 2 that Dom showed Darlene can actually give us some clues about that and other important factors in the show. First, Darlene knows how important she is and now she’s aware that Tyrell and Elliot are working together. We also learned that the FBI knows a lot more about what’s going on than we had any idea. But, they don’t know anything about Whiterose — she wasn’t on the board at all that we could see. And the FBI believes Tyrell is at the center of everything, when it really appears that it should be Elliot (Mr. Robot) who is at the center. Also, you can use the evidence board for clues as to who is not an alter of Elliot. If they’re on the board (and especially if they’re still alive), then you can bet they’re not another Elliot personality. Learn more about the FBI evidence board and see photos of it in our story here.

Some of the people listed on the board include:

Why Are Angela and Elliot So Important? Theories

Angela and Elliot are hugely important to the Dark Army’s plans, but when Season 2 ended we still weren’t completely sure why. Whiterose mentioned that Angela always seems to turn up, so she must be important in some way that even Whiterose doesn’t know. Elliot’s at the center of some of the Dark Army’s plans, even running things to a certain extent, and highly respected. We know that Angela and Elliot grew up together and both their parents were poisoned by water from an E-Corp plant that ultimately killed them. Some fans are theorizing that there’s a lot more to it than just that. Perhaps their parents were part of a Dark Army/E-Corp experiment that also affected Angela and Elliot. Maybe they even knew what was going on, and that’s why Elliot’s dad didn’t seek treatment. This could hint to a sci-fi element in the show, maybe that Angela and Elliot have powers of some sort or were part of some type of experiment.

The Dark Army really respects Elliot. They protected Elliot when he was in prison because of his Stage 2 plans. He somehow has gained a semblance of control within Dark Army. Whiterose hinted at a belief in the supernatural when she was talking to Angela, a hint that Angela held some greater purpose level of importance. It could be that there’s some type of religious-like respect for Elliot (and Angela) within the Dark Army, for reasons that we don’t yet know.

@PostShowRecaps did you notice that during the brown out at the lawyers house the newscast goes back and repeats a few seconds? #MrRobot

The rolling brownouts from Season 2 were likely hinting at something major in the show, but fans are still piecing together what. There’s the obvious connection that we were told in the finale: the brownouts are forcing the E-Corp building with the paper records to use UPSes, and those will then be used to blow up the building. But in true Mr. Robot fashion, there could be more to it than that. The brownouts could be a hint that something is not as it appears (just like the red lights were in the beginning of the season, and the prison-like bar symbolism.) Do you remember the scene when Angela visited her attorney and told her not to call her again? The TV station the attorney was watching was showing a newscast, and after the rolling brownout, the newscast skipped back about 15 seconds and repeated itself. Go back and watch the episode and you’ll be able to confirm that. Some fans are theorizing there’s a level of time travel (even just 15 seconds worth) going on, and the brownouts indicate when extra energy is being used for that purpose. Redditor Rotatos wrote a post theorizing that the Dark Army’s purpose is to delay radio and video transmissions by about 15 seconds, keeping them always ahead to some degree. 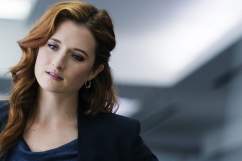