On tonight’s episode of 90 Day Fiance: Before the 90 Days, cast member Paul Staehle discusses a secret he’s been keeping from his girlfriend Karine Martins. In a previous episode, he mentioned a past relationship that “got him into some trouble”. Well, it looks like this may have involved some legal trouble, as In Touch Weekly reports that in 2007, Staehle allegedly committed second-degree arson. Seven years after, in 2014, he was convicted of “Burning Personal Property To Defraud Insurer.” In Touch Weekly also reports he may have served time in jail before getting supervised under shock probation, which is not scheduled to end until 2020. Staehle’s mugshot with Kentucky Department of Corrections is public online and RapSheets.org reports that Staehle’s probation began 4/06/2015 and is set to conclude on 4/1/2020. Fortunately, for Staehle, however, it looks like he got released from his probation early. Check out the below tweet that was posted. If this is correct, his probation ended September 11, 2017.

Arson isn’t Staehle’s only issue from his past, as he was also arrested for violating an emergency protective order in 2013. In a post on Facebook, Staehle actually addressed this arrest, posting the warrant issued for his arrest at the time, and saying:

It’s sad I actually feel I have to post this. I filed the initial EPO. She than filed one after she was served. This was my violation I was arrested over.

Starcasm reports that Staehle was arrested after sending non-threatening, civil text messages to his ex after an Emergency Protective Order was issued.

So, is Martins able to deal with Staehle’s past? Are the two still together? By the looks of some recent posts on Facebook, Staehle has remained in Brazil with Martins. It also looks like the couple is poking fun at Staehle’s legal issues. Check out their Facebook fun pics below.

In addition to Staehle’s “secret past,” the couple suffers other issues on 90 Day Fiance: Before the 90 Days. On one episode, Martins gets mugged for her cell phone with a machete. 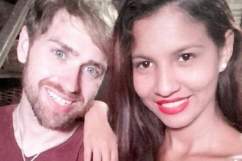