The Season 3 finale of Rick and Morty was hilarious. It had a lot of really great moments and the writing was quick, witty, and “streamlined” (to borrow a term from Beth.) But would this have worked better as a second-to-last, penultimate season 3 episode rather than a season 3 finale? Some fans are saying that The Ricklantis Mixup would have made a better finale. (After you finish reading this article, take our poll at the end and let us know what you thought of the finale.)

Really, it’s a shame that because viewers had so many high expectations for the finale, the brilliance of this episode might get overlooked. When was the last time we saw someone else have the same kind of sci-fi level toys as Rick? Seeing Rick battle the President was just pure gold. It was practically a stalemate because the President had so much tech at his disposal and he was so quick to react to every move that Rick made. Watching everything fall apart over a selfie that Morty didn’t even want anymore — well that was just brilliant (and ironic.)

You guys might have missed it, but in the #RickandMorty finale, when the President's teleported, it has to be lit like in minecraft pic.twitter.com/2lIKy1rZs3

Some viewers have said that this episode was a libertarian’s dream. Rick and Morty wanted freedom, but the President wanted them under his thumb. Without so much red tape to jump through, Rick was able to achieve peace that the President couldn’t. But the President was mad about that peace because he was looking out for himself and his power, not the greater good.

I loved the line where the President is acknowledging that Rick is a step ahead of him and one of his aides says, “I still say it has to be Putin.” That was perfect.

LMAOO "it mustve been putin"
#rickandmorty

And Beth’s existential crisis as the B plot did not disappoint. We’re still not sure if Beth is a clone or not. Some things really point to her being a clone, like her use of language that she doesn’t normally use and her love of Jerry. I’m leaning toward thinking she’s a clone. But would Rick really sacrifice his “standing” with the family just to keep Beth’s secret?

I like how they brought Jerry back into the family, and how Rick still thinks that Jerry’s so pathetic it’s impossible for people to get rid of him (like a parasite.) But not all fans are happy that Jerry and Beth are back together:

Beth & Jerry getting back together is the only bad thing about #RickandMorty season finale @RickandMorty @danharmon @JustinRoiland pic.twitter.com/k5jgUnfhzx

Meanwhile, everyone in the family has (temporarily) disposed of their fear that Rick might leave again. But it’s not the first time that’s happened, so they’ll probably be back to relying on him soon enough.

There were some great Easter eggs in the episode too. Like the symbol on the back of Jerry’s robe actually meaning “weak.”

My husband is Chinese and noticed that the back of Jerry’s robe means WEAK. I can’t breathe!!! #RickandMortyFinale #RickandMorty pic.twitter.com/bZPY9Ahe3Z

#RickandMorty was rick confirmed for being on the autism spectrum?!?

It’s possible that this doesn’t feel like a real finale because it originally wasn’t supposed to be. As you can see in the article linked at the bottom of this post, Dan Harmon originally intended this season to have 14 episodes, not 10. The finale was going to be different. But when they realized they just couldn’t do 14 high quality episodes for Season 3, they decided they could “finale-ify” Episode 10. So if you don’t feel like this was truly a finale, that’s likely why. It wasn’t originally supposed to be the finale.

The RickLantis episode should have been the finale #RickandMorty

I agree with the fans who think The Ricklantis Mixup would have been a better finale. It changed the universe significantly and brought back a fan favorite — Evil Morty. It left us with a feeling similar to the Season 2 finale. It would have been a great way to leave off the season.

But that doesn’t mean that The Rickchurian Mortydate wasn’t a great episode. It was hilarious. It was witty. It had some good character development. And it brought us Mr. Poopy Butthole again (and now he has a family!)

I hope that fans don’t overlook how great this episode was, simply because they’re disappointed that they didn’t get what they were hoping to see.

What did you think about this finale vs. The Ricklantis Mixup? Let us know in the poll and in the comments below. 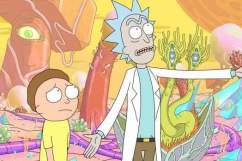 Read More
Adult Swim, Rick and Morty, TV
The Rick and Morty Season 3 finale was brilliant, but would Ricklantis Mixup have made a better ending? Read the review and take a poll about the finale.