During episode 3 of Star Trek: Discovery, we learned that the crew is working on a top secret mission that could give the Federation a big edge on the Klingons. In episode 4, we learned a lot more about this secret technology, which the crew refers to as the Spore Hub Drive. But this isn’t the first time we’ve seen Star Trek technology that could travel faster-than-warp in the canon. And every time, it brought seriously unwanted side effects. Could this tech be at all related to technology explored in series that take place later in the chronology?

When the crew boarded the Glenn in Episode 3, which was also working on this top secret tech, they saw that the entire crew was dead — mangled and deformed in a horrific fashion. And stalking around on the ship, attacking people, was a terrifying alien creature that we’d never seen before. In Episode 4, we learned that the crew was mangled because the Glenn’s destination couldn’t be properly determined and they crashed into a Hawking radiation field. We also learned that the alien creature resembles a tardigrade and is actually quite passive, only turning into a dangerous “killer” when threatened. In fact, this creature is the key to coding destinations into the spore drive.

The Discovery is using spores that make up the fabric of space itself (the bones and muscle and circulatory system of space) to create faster-than-warp travel. From Captain Lorca’s demonstration with Michael in Episode 3, and what we saw in Episode 4, it appears that the travel can be pretty much instantaneous, to anywhere in the galaxy.

This isn’t the first time we’ve seen faster-than-warp technology in Star Trek. Some fans are hoping that this technology will somehow be related to one of these later iterations. With the new details on the tardigrade creature, it’s looking a lot less likely that this will be the case. But it’s still interesting to compare this tech to other attempts at faster-than-warp travel.

Here’s a list of every faster-than-warp tech (and faster-than-normal-warp tech) that we’ve encountered in chronologically later Star Trek series:

Star Trek Discovery is intriguing. I'm thinking maybe this is the transwarp drive experiments but also thinking Equinox and Section 31.

Some viewers think the Mycellium network that the spores create might work similarly to transwarp travel. Perhaps, they theorize, the spore network works similarly to the Borgs’ transwarp network. But unlike the Borg, they won’t have the proper shielding to ward off undesirable effects. After Episode 4, this theory seems less likely to be the case.

The Excelsior also had a transwarp-like engine. Like Discovery, this was a prototype, experimental ship with many secrets. Excelsior had to pursue Captain Kirk’s Enterprise when they tried to use it to save Spock, and Scotty sabotaged the drive to prevent them from catching up with the Enterprise. It’s never known if the transwarp drive would actually have worked.

We’ve seen transwarp travel in other situations, too.  For example, we saw it in the form of a quantum slipstream drive on Voyager.

(Voyager spoilers in this section below. Don’t read on unless you’ve seen Voyager’s episodes “Hope and Fear” and “Timeless.”)

It could travel much faster than warp and was developed by a race called Species 116. It routed energy through the ship’s main deflector, which focused a quantum field for the ship to travel through. The phase variance of the field had to be constantly adjusted in order to maintain the slipstream. The slipstream was first discovered when Voyager found the USS Dauntless, which was actually a ruse by an alien named Arturis. Voyager was able to travel 300 light years in the slipstream, but ultimately decided it was too risky to use again.

A year later, Voyager created its own slipstream drive using benamite crystals. However, a phase variance threatened to overload the drive’s matrix and destroy the ship. They tested a shuttle that could help navigate Voyage through the slipstream. The slipstream crashed 10 light years from the Alpha Quadrant, killing everyone but Kim and Chakotay. They later changed history, allowing Voyager to survive, but they only shaved 10 years off their travel time because they weren’t able to maintain the drive.

This slipstream drive, from the way it’s presented, works quite differently from Discovery’s method of travel.

Infinite velocity was achieved when Warp 10 was experimented on in Voyager’s episode “Threshold.”

Spoilers for Threshold below.

In this episode, Paris discovered a way to pass the transwarp threshold using a new form of dilithium. “Warp 10” lets someone be at every point in a universe simultaneously. The technology, however, causes the person traveling to mutate. Janeway and Paris mutated into lizard-like creatures.

Since Michael isn’t mutating, we can rest assured this is a different type of technology in Discovery.

For other fans, the Discovery’s technology reminds them a bit of the Iconian gate system in The Next Generation (and Deep Space 9). The ancient Iconians had perfected instantaneous travel over vast distances up to 70,000 light years, and built that tech into gates. The gateway looked like a door that was suspended in space or surrounded by a frame. You could just step through and emerge somewhere else. After their civilization was destroyed, only two gates survived. Data accidentally activated one of those after finding the gate on Iconia. It acquired destinations automatically.

In DS9, the Dominion discovered another gate on the planet Vandros IV in the Gamma quadrant.

Perhaps the Iconians used the same spores to power their gate system, but they didn’t need a tardigrade to navigate it due to their advanced technology. We never did learn how the Iconian system worked, so that could always be a possibility.

The USS Equinox on Voyager

Spoilers below for Equinox Part I and II of Voyager.

There are quite a few similarities between the ethical questions that the USS Equinox faced and what Discovery will likely be facing.

In these episodes, which took place in 2376, The Equinox encountered sentient nucleogenic lifeforms that existed in an extra-dimensional area of space. They used interspatial fissures to gain access to the spacetime continuum. The Ankari regarded them as lifeforms of good fortune. The Equinox learned these entities had high levels of antimatter and could be converted into a source of fuel to augment their warp drive. This let them travel much faster: more than 10,000 light years in less than two weeks. The crew began murdering the life forms to increase their speed in getting to the Alpha Quadrant. Janeway, of course, disagreed with this on ethical grounds and ended up defeating the crew, with the lifeforms taking vengeance on the Equinox and destroying them.

Although the technology is very different from Discovery’s, the ethical questions may end up being quite similar.

Last but not least is subspace transporter tech, which was later banned because it was too unreliable and dangerous. The technology was featured in The Next Generation‘s “Bloodlines.” This transporter uses subspace instead of normal space to transport matter. Normal transporters in the 24th century are limited to 40,000 km. But subspace has a range of several light years. Matter was transported by placing it into a state of quantum flux. This was an unstable state.

Geordi and Data modified a transporter to use it on Picard. In some ways this is similar to what Discovery is using, since the spore’s network seems to parallel the idea of subspace. But there are also very strong differences.

Genesis isn’t warp technology. But we’re including it because some fans thought after Episode 3 that what Lorca was studying might somehow end up leading to Project Genesis. This seems less likely, unless the research falls apart and a tangential part of it leads to the Genesis discovery.

Genesis transformed matter approximately 40 years later. It was the code name for classified research by the Federation that made uninhabitable planets suitable for humanoid life through subatomic changes. The process reduced a target to subatomic particles and then reassembled them via a preprogrammed matrix. The first planet formed by genesis was unstable and caused mutated animals instead of life, destructive weather, and an unstable core.

In summary, it appears that the spore hub drive is not like anything we have encountered in the Trek universe before. It will likely end up being banned, due either to ethical concerns or unforeseen dangers from the technology. 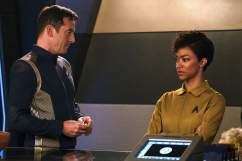