The Simpsons returns tonight for season 29, with a whole new batch of brand new episodes. Get the rundown on what to expect, the characters, show time and what channel to watch below.

LIVE STREAM: Click here to check out how to watch season 29 online via live stream.

GUEST CAST: Martin Short, Nikolaj Coster-Waldau, Shaquille O’Neal, Rachel Bloom and Norman Lear are said to be guest stars on the show this season. Kelsey Grammer will also reprise his role as Sideshow Bob in one of the 2018 episodes, with a musical number.

ADDITIONAL DETAILS: Bob’s Burgers and The Simpsons will team up for a couch gag on the show this season. There will also be additional couch gags for the credits this season, as usual. At San Diego Comic-Con International it was revealed that the Simpson family will head to New Orleans for JazzFest on an upcoming episode. In addition, an episode, which features Krusty the Clown, will re-imagine Stephen King’s It.

EPISODE 1 TITLE, SYNOPSIS & DETAILS: “The Serfsons” – In a magical medieval world, Marge’s mother is turned into an Ice Walker and Homer forces Lisa to use illegal magic to cure her; Lisa is kidnapped and Homer must lead a feudal uprising to save her. Nikolaj Coster-Waldau as a Marge-Like Man.

EPISODE 2 TITLE, SYNOPSIS & DETAILS: “Springfield Splendor” – Marge and Lisa turn Lisa’s experiences into a pop culture hit, but they struggle with creative differences. Alison Bechdel appears as herself, Rachel Bloom is herself, Roz Chast as herself, Dan Harmon as himself, and Marjane Satrapi is herself. Meanwhile, Martin Short is playing Guthrie Frenel.

EPISODE 4 TITLE, SYNOPSIS & DETAILS: “Treehouse of Horror XXVIII” – In segment “Exor-Sis”, Maggie is possessed. In “MMM… Homer”, Homer cannibalizes himself after he runs out of food while Marge and the kids are away from home. Lisa discovers an alternate reality where the Simpsons are a creepy yet perfect family. Famous chef Mario Batali appears as himself, Ben Daniels as a priest and William Friedkin as Dr. Kenneth Humphries. 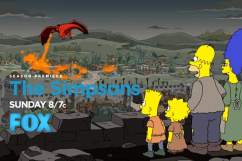 Read More
The Simpsons, TV
The 2017 release date of The Simpsons is today. Check out what time and channel to watch the premiere of season 29 on TV tonight.