Sure, Season 8 of The Walking Dead may be premiering tonight, but the most excited and dedicated fans are already looking forward to Season 9. And believe it or not, we already have a few clues about what to expect in a year from now. And it looks like that come Season 9, things could be very, very different in the world of The Walking Dead. Here’s everything we know about Season 9 so far.

‘The Walking Dead’ Has Already Been Renewed for Season 9

It’s not a big surprise to anyone, but The Walking Dead was already renewed this month for Season 9. Season 7 brought in 11 to 12 million viewers. The series high was 17.2 million. But 12 million is still great, considering that Fear typically gets about 3 million and Into the Badlands dropped from 3.4 million at the beginning of Season 2 to just 1.2 million at the end. Even Better Call Saul ony brings in about 1.5 to 1.8 million viewers. In fact, the producers can pretty much have as many seasons of the show as they want. In March during PaleyFest in LA, showrunner Scott Gimple said he’d like to do 20 years of The Walking Dead.

‘The Walking Dead’ Season 9 Will Likely Premiere In October 2018

The Walking Dead has been on a pretty predictable schedule when it comes to its seasons, unlike its sister series Fear the Walking Dead. So we can be pretty sure that the show will return for Season 9 around the same time that Season 8 is premiering. Here are the premiere dates for all the seasons of The Walking Dead:

It’s a pretty safe bet that Season 9 will come back in mid-to-late October 2018.

Season 9 Will Be Very Different

If you’re looking forward to Season 8, you might be even more excited about next year’s Season 9. Gimple has said they’re emphasizing teams in Season 8 because Season 9, “especially the first half, is going to be very, very different.”

Comic book readers might have a better idea about what Gimple means, but the show hasn’t been afraid to deviate from the comics in some pretty big ways. So it’s anyone’s guess exactly what that statement means, but we can safely expect Season 9 will turns things upside down. And what about the actors? It’s anyone’s guess right now who will be staying and who will be gone.

Andrew Lincoln’s and Daryl Reedus’ current contracts last through Season 8. The actors made $550,000 per episode in Season 7, and are making $650,000 per episode in Season 8. This show has been a big commitment for the actors, and a lot of times actors don’t like to stick around with one project quite this long. It seems a safe bet that the two actors will stick around longer, but in this universe you really never know.

In fact, both Lincoln and Gimple said in late September that they believed The Walking Dead  could survive without Rick. When asked about the show continuing without him, Lincoln told EW:

There is a completion thing that I think I deserve for doing it for so long. And also probably the audience would like some completion… I’m not saying that the show would ever finish, but I certainly think that there’s an opportunity for the show to change at some point, and I think it should… It’s beautifully set up for that [Lincoln leaving] — for the camera to be certainly his story, and then it just shifts off. If ever there was a landscape or an environment to do that, it’s our show. But whether or not that’s this season… well, you have to find out, don’t you?”

Robert Kirkman agreed, but was quick to add that viewers shouldn’t have to worry about that any time soon. Gimple made it sound like a show without Lincoln would be a long way away: “We’ve just scratched the surface of this world. We don’t want to go on without Rick Grimes, but again, in year 20, in year 30, who knows?”

So although it looks like everyone’s open to Rick leaving the show eventually, that might not be the big change we’re expected to see in Season 9. 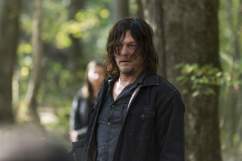