This Is Us spoilers have given viewers plenty of information about the show, but just about everyone has been wondering one thing and one thing only since the show began: How does Jack Pearson die?

On Tuesday night, the fifth episode of Season 2 is set to air on NBC. So far this season, fans of the show have received quite a few hints about Jack’s death, but there have not been any definitive answers about what exactly happened to him.

Actress Mandy Moore, who plays the role of Jack’s wife, Rebecca, gave away a couple of small tidbits in a recent Facebook Live session. Moore talked to fans on the social media platform last Wednesday, answering some questions and giving a backstage tour of the lot and the set of the popular show.

Several people asked Moore about Jack’s death, trying to find any kind of information that they possibly could — and hoping that Moore would spill the beans. While Moore did her best to keep the show’s biggest secret under wraps, she did talk about the upcoming episodes and shared that fan’s will learn Jack’s fate soon.

“You guys! Didn’t we give you enough of a morsel to sort of hang on to in that first episode? Just be patient, because, I’m telling you, the next, my goodness, five or six episodes … unbelievable. And I’m telling you, your patience will pay off. There is (sic) just so many twists and turns — and not in a manipulative way — in a completely organic, grounded, just fascinating fashion. I think everyone is going to be really satisfied with what we learn about certain characters,” Moore said, adding that the cast just finished filming the first half of Season 2.

This Is Us will continue on for five more episodes after Tuesday night, before taking its winter hiatus. The show is slated to return in January 2018, when the remaining eight episodes of Season 2 will air.

And, for those wondering if Jack’s death will play out in Season 2, wonder no more. There won’t be a Season 2 finale cliffhanger, according to the show’s creator. 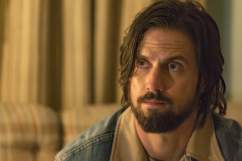 This Is Us Spoilers: Will We Learn How Jack Died?

Read More
Spoilers, This Is Us, TV
Mandy Moore did a Facebook Live in which she promised 'This Is Us' fans that Jack's death is worth the wait.