While season two has promised to finally reveal how exactly Jack Pearson died, the plot that will glue the season together is his struggle with alcoholism. We already learned during season one that his drinking has put a strain on his relationship with Rebecca. Tonight, we saw the lead-up to the following scene from “The Big Three.”

Jack vowed to stop drinking and gave her a gift – a necklace with a crescent moon charm. She said she loved it and would never take it off.

“I got a moon because of…” Jack began.

That song of course was Yusuf/Cat Stevens’ “Moonshadow,” as we learned in the season one finale. In the episode Rebecca performed the song the night they met. Even after the big fight in “Moonshadow,” we’ve seen Rebecca still wearing the necklace. We’ve also seen Rebecca wear the necklace in the present, even after marrying Miguel.

“Moonshadow” is the perfect song for Jack and Rebecca. The meaning of the song is that there is always something to gain from personal setback or tragedy. As Jack and Rebecca are learning, the couple can survive his alcoholism and it came make them stronger.

In “A Manny-Splendored Thing,” we see what made Jack buy the moon necklace. Throughout the hour, Jack took a sip of Jack Daniel’s at work. One day after work, he decided to get a Rebecca a necklace. The salesman suggested diamonds, but Jack refused.

“Diamonds are for anyone, ok,” Jack said. “My wife is not anyone. You know Mary Tyler Moore? The actress. You know Farrah Fawcett? You smush them both together… That’s my wife.”

Later, we see the scene from “The Big Three” replayed. Jack insists that he can really stop and gives Rebecca the necklace. It’s the moon necklace.

Notably, creator Dan Fogelman told Entertainment Weekly back in September 2016 after “The Big Three” aired that we “should” read something into the fact that Rebecca still wears the moon necklace after marrying Miguel. Perhaps if Jack didn’t die, they would still be together.

The necklace has taken on such an important role on This Is Us that Etsy store owners are selling This Is Us moon necklaces. 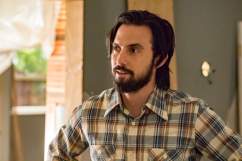