For those watching The Wendy Williams Show live today, they probably weren’t counting on a Halloween episode this scary. Just as Williams was about to announced contenders in the show’s Halloween costume contest, she became wide-eyed, raised her hand towards her crown, stumbled a bit and fell backwards to the floor. Production members quickly rushed over to her and the show cut to commercial. Fortunately, Williams is okay and when the show returned, she told viewers that she was actually overheating in her costume and that she did pass out. She assured fans that her fainting was not a stunt, but that she would power through and finish the show. The pass out moment occurred close to the end of the show and when Williams realized the show was pretty much over, she joked, “Was I passed out for that long?” See Williams’ return in the below Twitter video after the commercial breaks.

Wendy Williams came back after commercial break. Said she overheated in her costume. pic.twitter.com/jccZaQ9oK2

Billboard reported the following statement from spokesperson Ronn Torossian on the incident, “Ms. Williams fainted on-air this morning. She is dehydrated and is on her way home for a good day and nite of sleep. She has been examined by medical professionals and is well. She is ok and will continue as shows as planned. She will address this on-air tomorrow. She has never missed a day of work and is looking forward on November 13th to her 1500th show.” Jerry O’Connell was a guest on the show today and when he came out as “The Naked Cowboy” from NYC, he quietly checked on Williams to make sure she was okay. And, later on in the day, Williams checked in with fans, updating on her health status via Instagram. Check out the quick video below.

Read a few of the tweets from fans and stars watching the show as Williams suffered a fainting spell.

Prayers up for the Sister Wendy Williams!

Praying for @WendyWilliams seeing that made me uncomfortable and heartbroken. Love you Wendy! ?

Is Wendy Williams okay!? She just passed out in the middle of her show! She looked so scared!! #WendyWilliams

Some fans are commenting on Twitter that they hope Williams gets a medical check-up just in case her fainting was caused by an underlying illness of some kind. For her Halloween episode, Williams was dressed as Lady Liberty, in a sequined jumpsuit, matching wig and crown. Williams is 53 years old. On tomorrow morning’s show, she will address her medical emergency. The Wendy Williams Show airs live from 10 – 11 a.m. ET/PT time delayed on FOX. And, tomorrow morning’s guest is Sheree Whitfield from The Real Housewives of Atlanta.

This isn’t the first time that Williams has addressed matters in her personal life on her show. Previously, there were reports that her husband Kevin Hunter had a longtime mistress named Sharina Hudson. Williams, who is famous for her “hot topics”, decided to address the reports on her show, saying that she wasn’t planning on being a “hot topic” herself. At the time, Williams said she that stands by her man and “all is well in Hunterville.” She also joked, “Don’t believe the hype and if there was hype, believe me you – I would let you know. But, I’ll be following this story, so I guess I’ll have to watch to find out what happens.” According to Daily Mail and Radar Online, Kevin Hunter has been cheating with a woman named Sharina Hudson for ten years and even bought her a place to live. Both sites reported that Hunter was splitting his time between wife Williams and Hudson. But, Williams stated on her show that this news was not true. 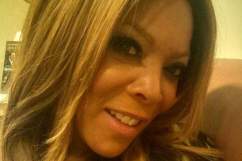