This morning on the Today Show, Savannath Guthrie and Hoda Kotb announced that, after over a two-decade-long career, NBC network has fired Matt Lauer for inappropriate sexual behavior. Network executive Andy Lack noted in a statement that the complaint made against Lauer, who has been with NBC since 1994, leads the network to believe this is not an isolated incident. Since 1998, Lauer has been married to his wife Annette Roque and clearly, this scandal will have a great effect on the couple’s family. Get to know more about former model Roque and her rocky relationship with husband Lauer over the years.

1. Roque Filed for Divorce from Lauer in 2006, but the Couple Reconciled

When Roque was pregnant in 2006, she filed for divorce from Lauer, but the couple ended up reconciling. At the time, Roque said that she underwent “cruel and inhumane treatment” from Lauer. According to In Touch Weekly, Roque’s attorney Nancy Chemtob argued that, “The conduct of defendant [Matt] so endangers the physical and mental well-being of the plaintiff [Annette] so as to render it unsafe and improper for plaintiff to cohabit with defendant. Defendant has continuously and repeatedly given higher priority to … personal interests than his family obligations to plaintiff, causing plaintiff to feel abandoned, isolated and alone in raising the parties’ children.” In the paperwork associated with the case, it was claimed that Lauer was controlling and that he refused “to allow plaintiff to make even the smallest decisions without his approval, including, but not limited to, decisions regarding finances, travel plans, decorating the parties’ homes and domestic help issues.”

The papers were withdrawn by Roque weeks later and Roque gave birth to the couple’s son, Thijs, two months after the divorce was initially filed. According to an insider who spoke with Radar Online, “These divorce papers were filed more than eight years ago and revoked three weeks later. In New York at that time, irreconcilable differences could not be considered grounds for divorce. A spouse had to prove cruel and in-humane or unsafe treatment, which meant that lawyers had to establish grounds.”

2. Lauer Was Accused of Cheating on His Wife With Natalie Morales

In 2016, Matt Lauer addressed allegations that he and former Today co-host Natalie Morales had an affair. Both Lauer and Morales denied the claims and on The Mike Lupica Podcast, Lauer stated, “When you feel your family is being threatened and hurt, you speak up. And then you put your head down and go back about your business.” At the time, People reported that there were rumors Morales was moving to Access Hollywood because of an inappropriate relationship with Lauer.

When asked about the alleged affair by Page Six, Lauer maintained that, “Every aspect of this story is untrue, and it’s frankly sad that someone would tell lies to harm everyone involved.” Morales added, “There is absolutely no truth to this completely absurd story. It is damaging, hurtful and extremely sexist. I have proven myself in all aspects of my job as a news professional and journalist, and am adding to my role, taking on three jobs with Access Hollywood Live and Access Hollywood, in addition to Today. This move was dictated by me and my desire to grow in my career. Any insinuations beyond that are uninformed.”

In 2012, the Daily Mail reported that there were rumors Matt Lauer’s wife would divorce him if his former co-anchor Ann Curry was replaced by Morales. A source told The National Enquirer that, “When she heard about Ann getting the boot, the first thing she told Matt was that she didn’t want him cozying up any closer to Natalie. In fact, Annette drew a line in the sand and said if he pushed show bosses to make Natalie his new co-host, she’d divorce him. Annette knows Matt is the key to the Today franchise and his bosses will put whoever he wants in the co-host chair.” According to Liver Amp Up, Lauer was rumored to have cheated on Roque with chef Giada De Laurentiis, but he publicly denied these claims. 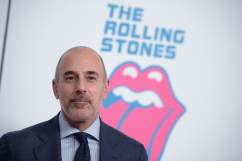 3. Roque & Lauer Have 3 Children Together

Matt Lauer and Roque have three children together – sons Thijs and Jack, along with daughter Romy. Lauer has said that his children aren’t keen on the fame aspect of their father’s life, though he becomes a “cool dad” when he interviews celebrities like Ariana Grande.

According to Liver Amp Up, when Roque briefly filed for divorce in 2006, the divorce papers claimed Lauer valued his job more than his children and wife. But, in an interview with Parenting from years ago, Lauer stressed the importance of having a positive male role model in children’s lives. Lauer explained that with his busy schedule, he has had to figure out how to spend quality time with his children, admitting that, “I would always want to spend more time with them, no question about it. My situation is slightly more unusual. We made a decision a couple of years ago to move out of the city. Way out. So my home is in the Hamptons and that’s where our kids go to school. As a result, I’m in [New York] city three or four nights a week, and I’m home on weekends. I go for school events–I do get out there for those. Because of this decision we made–and wanted to make for them–my time is consolidated into three intense days. The time is more precious and the time you spend is more significant.”

Lauer said that he had a very hands-on father growing up, even though he was a child of divorce. And, he said that because of his dad’s influence, he tells his children he loves them several times a day. Lauer also revealed that he and wife Roque make sure to keep their children’s lives private. He explained, “Annette and I have a longstanding guideline about not putting our own children on TV. We want them to maintain their privacy.”

This year, Lauer said on the Today Show that he tried to have a sex talk with his 15-year-old son Jack, but it was a failure the first time around. Lauer stated, “With my oldest son, I tried to have ‘the talk’ in the car.’ I don’t remember exactly what prompted it, but (my wife) Annette and I talked about it that I needed to have the talk. So I had this car ride and … I said, ‘Jack, you know, I do have to…’ and he looked at me and said ‘Not happening. I’m not gonna have this talk. I know, I know everything, you don’t have to do that.'” 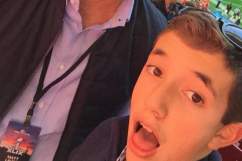 Roque is Lauer’s second wife, as he was previously married to TV producer Nancy Alspaugh from 1981 to 1988. The couple had no children together. Alspaugh is an Emmy Award winner, working on Leeza and The Bradshaw Difference. Alspaugh is a former executive from Group W Productions and also makes a living as an author, according to the Hollywood Reporter.

After her marriage to Lauer was over, Alspaugh went on to marry FOX Sports executive H. Read Jackson. Jackson died in 2016 after a long battle with cancer. He was known for producing shows such as Entertainment Tonight, 60 Minutes and ABC World News Tonight. Alspaugh’s Instagram profile photo is still a picture of herself with late husband Jackson.

Alspaugh grew up with a brother who had Down Syndrome and today, she has a son who has autism, according to her personal wesbite. On her website, it states that, “Having grown up with a younger brother with Down Syndrome, Alspaugh-Jackson was aware of the challenges families face raising special needs children. She feels it was no accident that she was given a special needs child to raise herself.” Wyatt is Alspaugh’s only child and today, she is the executive director of non-profit organization ACT Today!, which stands for Autism Care and Treatment Today! See a photo of Alspaugh and her son below.

The hardest question? When does dad come home!

5. Matt Lauer & His Wife Met on a Blind Date

In the summer of 1997, stylist Maria Santoro set up Lauer and J. Crew model Roque on a blind date, which ended up as a success. The two became engaged just five months later and were married in Water Mill, New York, where Bryant Gumbel served as Lauer’s best man, according to People. Gumbel was Lauer’s predecessor on NBC’s morning show. While the reception was in Water Mill, the ceremony was held at the Presbyterian Church in Bridgehampton. Stylist Maria Santoro, who first set up the couple, served as one of Roque’s bridesmaids.

During an interview with People, NBC’s Al Roker recalled Lauer’s wedding day and dished on the couple’s interaction with each other that day, saying that, “Watching them at the table. They would be talking to somebody, and when that person would leave, the two of them were looking into each other’s eyes. You could see they were truly, truly happy.” On an interesting note, Roker and Lauer have admitted to not really liking each other when they first met. On the Today Show, Lauer admitted, “We had a rough start. It’s amazing we are dear friends now … Long story short: We’re on the air one time, on local television years ago. Al said something to me that I did not appreciate, live on television.” According to Roker, Lauer had messed up Roker’s name and Roker’s response was saying, “Wow, not so easy in the big leagues, is it pretty boy?”

Years ago, Lauer was reported to have not gotten along with former co-anchor Ann Curry, who was also a guest at his wedding to Roque. According to TIME, Lauer was rumored to have played a major part in Curry’s exit from the show. You can see Curry’s departure from the show in the below video clip.