Getty Elizabeth Smart speaks to the press after Brian David Mitchell is convicted of her kidnapping in 2010.

Elizabeth Smart was kidnapped from her home in 2002, and that means that 2017 marks the 15th anniversary of her abduction. Smart recently worked with Lifetime to develop a movie about what happened to her when she was kidnapped. “I Am Elizabeth Smart” premieres on Lifetime tonight, November 18 at 8 p.m.

In June 2002, Elizabeth Smart was a 14-year-old girl. She was kidnapped from her bedroom in Salt Lake City, Utah on June 2, 2002 by a religious fanatic named Brian David Mitchell. Mitchell brought Smart to a camp near her home, where he and his wife, Wanda Barzee, held her captive. Smart endured being starved, drugged, raped and being subjected to bizarre religious ceremonies by her captors. Smart was held for 9 months before being rescued and brought home to her parents.

Smart was held captive by Mitchell and Barzee for 9 months before being rescued and brought home to her parents. She later described Mitchell as “evil, wicked, manipulative, sneaky, selfish, greedy, not spiritual, not religious and not close to god.”

Here’s what you need to know about Smart’s kidnappers:

Though he was taken into custody along with his wife in 2003, Brian David Mitchell didn’t get a sentencing until 2011. In 2011 Brian David Mitchell was sentenced to life in federal prison for kidnapping Elizabeth Smart at knifepoint, raping her and holding her captive for months.

In 2005, Mitchell underwent another psychiatric evaluation and was again deemed not fit for trial. He stayed in the Utah State Hospital until 2008, when the case was transferred to federal court. Mitchell was deemed competent to stand trial in March 2010.

At his sentencing in 2011, the then 23-year-old Smart herself had a few words to say to Mitchell:

I know that you know what you did is wrong. You took away 9 months of my life that can never be returned. You will never affect me again.

Barzee’s case was relatively easy to handle compared to the almost 10 years it took to sentence Mitchell. Though her trial also occured in 2010, Barzee eventually pleaded “guilty but mentally ill” to one count of conspiracy to commit aggravated kidnapping. She was sentenced to a concurrent 15 years in state and federal prison.

Barzee received credit in federal prison for the 7 years she was in custody awaiting trial, but she did not receive any credit toward her state sentence. In 2016, Barzee’s federal imprisonment was terminated and she was transferred to the Utah Department of Corrections to begin her state prison sentence, which expires in 2024.

Before the kidnapping of Elizabeth Smart, Brian David Mitchell had sexually abused his stepdaughters, Rebecca Woodridge and LouRee Gayler. The allegations of sexual assault were told to jurors during Mitchell’s trial to prove that he was a long-time pedophile and that he used religion to justify his crimes.
Barzee’s daughter, LouRee Gayler also testified that Mitchell sexually assaulted her. In her testimony, she said that Mitchell, her stepfather would show her pictures of nude women while they prayed alongside her mother.

In her testimony, Gayler also told the jury about a time when her parents served her pet rabbit to her for dinner, telling her it was chicken. She said her parents laughed when she found out. Gayler ran away from home shortly after that.

Woodrige has since forgiven Mitchell for what he did to her and they have kept in contact with one another since he was sent to serve his life sentence in a federal prison in Arizona. They speak on the phone and write letters to one another.

4. Mitchell Kidnapped Elizabeth From Her Bedroom

The Smarts lived in an affluent neighborhood called Federal Heights in Salt Lake City, Utah with their 6 children. The family attended an awards ceremony at Elizabeth’s middle school on June 4, 2002 where Elizabeth received awards. The family got home and got ready for bed that night, and Elizabeth’s father Ed checked to make sure the doors were locked but did not turn on the family’s alarm system, stating later that the alarm sometimes went off when the children moved around the house at night.

Elizabeth went to sleep in the same bedroom as her then 9-year-old sister Mary Katherine. When Mitchell came in to kidnap Elizabeth, Mary Katherine pretended to be asleep, thinking that he had a gun and she was the only one that knew what was happening to her sister.

Once Mitchell forced Elizabeth out of the room, Mary Katherine went to tell her parents but got startled when she saw Mitchell and Elizabeth in the hallway. She hid in her bedroom for about 2 hours before telling her parents what had happened. She didn’t give the police an accurate description of Mitchell, thinking the man she saw was between 30 and 40 when he was actually 49 years old.

After several months of Elizabeth missing, Mary Katherine realized that the man’s voice she had heard that night sounded just like a man that worked for them sometimes who went by the name “Immanuel”. Police didn’t follow this lead at first, thinking that Mary Katherine was inaccurate and that the kidnapping had happened too long ago for her to remember the information. When the lead was shared on “America’s Most Wanted,” however, Brian David Mitchell was identified and police found Elizabeth soon after.

5. Mitchell Was Religious and Referred to Himself as “Immanuel”

Brian David Mitchell is brought into court for his competency hearing February 16, 2005.

Brian David Mitchell’s religious views are fundamentalist and extreme, according to an old friend named Doug Larsen, who testified against Mitchell at his trial. He said that he and Mitchell used to be friends and share most of the same religious views, but he no longer could recognize the person in front of him at the trial.

Mitchell’s old friend said that he was “confident to the point of being dogmatic” and that his religion was behind everything he said, and people that they worked with found that annoying. During work, Mitchell would pull out his hymn book and sing softly to himself at his desk. Mitchell also used this tactic at his trial, often singing quietly to himself while people testified against him.

The tension between Mitchell and the people around him started to rise when Mitchell started asking people to call him “Immanuel” and began speaking about his views on polygamy. He and Larsen fell out of contact after that. 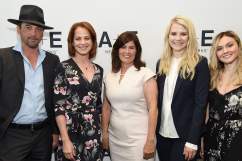 ‘I Am Elizabeth Smart’: Meet the Cast of Lifetime’s New Movie