Viola Davis took the stage to present Whitney Houston’s tribute for the 25th anniversary of The Bodyguard. It was the best-selling movie soundtrack of all-time, Davis stated as well. In the crowd, were some of Houston’s relatives, waiting to hear Christina Aguilera’s performance in honor of the event. Beginning the medley, Aguilera started off by singing “I Will Always Love You.” Dressed in black, Aguilera delivered a passionate and stunning performance. After “I Will Always Love You”, a curtain lifted to show footage from The Bodyguard as Aguilera transitioned into the song “I Have Nothing.”

Soon, Aguilera began to sing Houston’s song “Run to You.” Years ago, when Houston was honored with the Lifetime Achievement Award at the BET Awards in 2001, Aguilera also took the stage to deliver the same song in honor of the occasion. Houston gave her approval of Aguilera’s performance during her acceptance speech that night.

This is breathtaking @xtina…

To finish off her tribute, Aguilera was joined by a choir of women to execute Whitney Houston’s song “I’m Every Woman.” Aguilera prompted the crowd to join her in singing and clapping along to the performance. Singer Pink couldn’t help but smile, shake her head, and sing along. Unfortunately, some also took Pink’s facial expression as disapproval over the performance. Many viewers voiced their unfavorable opinions about Aguilera’s performance via Twitter. At the same time, Aguilera also received praise from viewers for her set.

Prior to Aguilera’s performance tonight, she released the following statement in excitement over the opportunity, “To be honoring THE one and only, Whitney Houston, is a blessing and I am grateful to celebrate the spirit of her songs and legend that lives on. I feel eternally fortunate to have personally met her on and off the stage. My deep appreciation for her kindness to me while coming up in the business – her graciousness, generosity, humanity and beauty – lived up to everything I could have hoped for in meeting my idol and will forever be cherished in my memory of her.” The Estate of Whitney Houston also released their own statement to the press, saying, “Whitney herself stated in 2001 that Christina Aguilera sang the best version of her song ‘Run to You.’ It is with great appreciation and honor that she is returning to participate on the American Music Awards for a special tribute honoring the 25th anniversary of The Bodyguard. Whitney said that Christina is without a doubt one of the best voices she enjoyed in this generation of music. From the Estate of Whitney E. Houston, we thank you with great joy!” 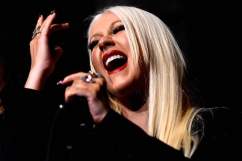