Tonight is part 1 of the season 25 finale of Dancing With the Stars, with four contestants left in the mix. Violinist Lindsey Stirling, actor and race car driver Frankie Muniz, HGTV’s Drew Scott and actor/singer Jordan Fisher are the four finalists. Last week, Muniz had difficulties with pro partner Witney Carson in recreating a dance routine that Julianne Hough executed on a previous season of Dancing With the Stars. In an interview with Us Weekly, Muniz talked about how his issues in making the elaborate dance come to life. He admitted, “It’s crazy to think to think that we got here, but also it’s kind of sad because we’re almost done, no matter what. I love it. I’m going to really try hard this last week, hopefully we make it to the final. She’s been an awesome, it’s been such an amazing experience. This is exceeding my expectations by a trillion, this is the coolest thing I’ve ever done and I’m so glad I was a part of this.” This week, Julianne Hough returns to the show as a guest judge. In previous years, she was a pro contestant and she later became a full-time judge. This season, though, she decided to take some time away from the show. So, her appearance tonight is definitely a treat for fans.

As for contestant Jordan Fisher, he has been considered the front-runner, with Lindsey Stirling at a close second. Fisher recently talked about how much he’s been stressing over the possibility of winning this season’s mirrorball trophy. He dished to Entertainment Tonight, “I love the show, I love the experience and I love Lindsay and I want her to win so badly, it hurts me. I lose sleep over it, especially when I’m given a style that I know is going to kill my hips because that’s just the sort of thing that it does. It kills people’s hips. I have a history of hip issues and injuries, and for me personally, I just want to give her everything that I possibly can week in and week out, so that she can feel good and do really well on Monday and it causes me to lose sleep.” Fisher is paired with pro Lindsay Arnold this season. 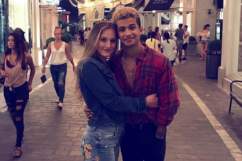 If you don’t have cable or can’t get to a TV, you can watch ABC online, on your phone or on another streaming device by signing up for one of the following cable-free, live-TV streaming services. They cost a monthly fee but all come with a free trial, so you can watch tonight’s show for free if you’re in a select market:

DirecTV Now: ABC (live in 39 markets) is included in all four channel packages, ranging from $35 to $70 per month. It comes with a free 7-day trial, and you can watch on your computer via your browser, or on your phone, tablet or streaming device via the DirecTV Now app

Sling TV: ABC (live in 8 markets) is included in the “Sling Orange” plus “Broadcast Extra” channel package for $25 per month. It comes with a free 7-day trial, and you can watch on your computer via your browser, or on your phone, tablet or streaming device via the Sling TV app

PlayStation Vue: ABC (live in 19 markets) is included in all four channel packages, ranging from $40 to $75 per month. It comes with a free 5-day trial, and you can watch on your computer via your browser, or on your phone, tablet or streaming device via the PlayStation Vue app

Property Brothers star Drew Scott has been performing on season 25 of Dancing With the Stars with pro partner Emma Slater the two have become buddies. Now, he is incorporating Slater into his wedding with his fiancee Linda Phan. People reports that Drew Scott and Slater have actually become close friends, so Slater and her fiance, DWTS pro Sasha Farber, have been added to the wedding guest list. Scott has had the odds stacked against him this season and has definitely not been a front-runner, though he’s won over his voters. And, when it comes to contestant Lindsey Stirling, she has had many struggles this season. She is definitely a talent and has been paired with pro Mark Ballas, but she’s suffered a rib injury and even went through a break up during this journey.

Part 1 of the finale airs tonight from 8 – 10 p.m. ET/PT, while tomorrow’s finale and results run from 9 – 11 p.m. ET/PT. Some of tonight’s music guests include Pitbull, Fifth Harmony and Alexander Jean. One contestant will be eliminated tonight and the three remaining couples will have to put together a new routine in less than 24 hours, for tomorrow’s show. Finalist Jordan Fisher is set to give a singing performance tomorrow in addition to dancing, while Lindsey Stirling will also play her violin. And, one of this season’s cast-offs, Debbie Gibson will sing as well. Other performers set to appear include Kelsea Ballerini and Becky G. 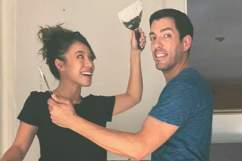