David Cassidy has died, two days after his death was incorrectly reported by various sites online.

“Doctors advised the family Tuesday the only way David could survive was with a liver transplant, but he was not a candidate because he would never survive surgery. The family decided at around noon to remove life support,” TMZ reported.

Not long after TMZ’s initial report that Cassidy was in the hospital suffering from organ failure, a few sites claimed that The Partridge Family star had passed away. Although Cassidy’s outlook was grim based on his condition, he was still alive.

“Publicist JoAnn Geffen tells The Associated Press that Cassidy is in a Fort Lauderdale-area hospital with liver and kidney failure. She says he’s in a private room, conscious and surrounded by family. Geffen says there is nothing ‘imminent’ about his condition, and doctors are hoping to ‘keep him as well as they can until they can find another liver,'” ABC News reported on November 18.

The following day, more stories about Cassidy’s death surfaced. In fact, if you searched “David Cassidy dead” on Google, you’d see that the search engine listed him as having died on Sunday, November 19. However, Cassidy was still in the hospital and was alive until November 21.

Various blogs had published stories about Cassidy’s death. Those stories then circulated on social media, leaving hundreds if not thousands of people believing that Cassidy had passed away. Cassidy’s death was also “confirmed” on Wikipedia for a short time, but was removed from his page a short while later.

Cassidy, 67, is in need of a liver transplant. However, he is said to be alert and he is happy to be surrounded by family, according to People Magazine.

“There had been many family issues because of his alcoholism, but they are all reuniting in support of him. He was delighted to see them. When his brother Patrick walked into the room, David lit up like a Christmas tree. There’s been total resolution within the family. They will always be there for him,” a source told the outlet.

Several people have posted messages in remembrance of the former teen idol and those messages have continued today.

In an updated report posted on Monday morning, CNN confirmed that Cassidy is in “critical condition.” The site quoted the aforementioned statement from Cassidy’s rep, adding that the actor and his family are taking things “day by day.”

His son, Beau, posted the following statement on his dad’s Facebook page on Sunday.

“Unfortunately David is very sick. However he is getting the support he needs, surrounded by the people he loves most. Thank you very much for your love and concern that you have expressed in your messages to him.”

Cassidy’s health had been declining in recent months. Back in February, it was reported that he had been diagnosed with dementia.

“I was in denial, but a part of me always knew this was coming,” Cassidy told People Magazine at the time, sharing that his mother also suffered from loss of memory. “I want to focus on what I am, who I am and how I’ve been without any distractions. I want to love. I want to enjoy life,” he added.

It is unclear what caused Cassidy’s organs to fail. 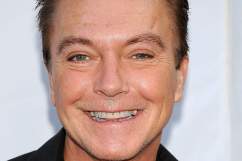