Tonight at 9 p.m. Eastern (8 p.m. Central), Hallmark Movies & Mysteries’ latest Christmas movie, Christmas Homecoming, will premiere. It’s a story of how saving a military museum sparks love and a new beginning. The movie stars Julie Benz and Michael Shanks. After you read all about this movie and watch it, come back and share any comments or questions that you may have about the movie in our comments section below. Take time to let other readers know what you thought and talk about the movie with other viewers.

Here are some more photos to get you in the holiday mood: 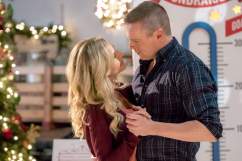 Where Was Hallmark’s ‘Christmas Homecoming’ Filmed?

Read More
Christmas, Hallmark, TV
Find out what time Christmas Homecoming from Hallmark Movies and Mysteries airs tonight, see photos, and learn all about the cast.