Tonight at 8 p.m. Eastern (7 p.m. Central), Hallmark’s latest Countdown to Christmas movie, The Mistletoe Inn, will premiere. It’s a story of an aspiring novelist who finds love after she signs up for a writing retreat after she’s been dumped. The movie stars Alicia Witt, David Alpay, and Casey Manderson. After you read all about this movie and watch it, come back and share any comments or questions that you may have about the movie in our comments section below. Join in the discussion with other readers.

When aspiring romance novelist Kim Rossi is unceremoniously dumped by her soon-to-be-published romance novelist boyfriend, Kim takes stock and decides to take a leap. She signs up for a romance writing retreat at a quaint Vermont Inn shortly before Christmas, where a top romance novelist is scheduled to attend and read the work of one lucky writer. Shortly after arriving, she crosses paths with Zeke, whom she initially finds to be intrusive and, naturally, ends up being her assignment partner. Worse yet, her ex is also at the retreat. Despite these bumps in the road, Kim steps outside her comfort zone and plunges into the writing exercises, surprising herself. Equally unexpected is the attraction that seems to be building between her and Zeke that promises to take her down a road she never imagined traveling. Based on the book by Richard Paul Evans.”

The movie stars Alicia Witt as Kim Rossi. She debuted in film at the age of seven when she starred in David Lynch’s Dune. Since then, she has a long line of appearances to her name. These include The Walking Dead, Nashville, Supernatural, Twin Peaks, The Christmas List, Justified (Wendy Crowe), 88 Minutes, Two Weeks Notice, Last Holiday, Urban Legend, The Upside of Anger, Mr. Holland’s Opus, Four Rooms, Fun, Vanilla Sky, Playing Mona Lisa, House of Lies, Friday Night Lights, The Mentalist, Law & Order: Criminal Intent, The Sopranos, Cybill, Two and a Half Men, Ally McBeal, and more.

Casey Manderson stars as Garth. His other appearances have included Love Struck Cafe, The Dangers of Online Dating, Garage Sale Mystery, The Perfect Bride, A December Bride, Season’s Greetings, Glass, Jaguars, Grumpy Cat’s Worst Christmas Ever, A Novel Romance, Witches of East End, Once Upon a Time in Wonderland, The Ennead, and more.

The movie is based on the book by Richard Paul Evans. You can relive tonight’s movie by reading the book here. Many viewers have been asking for snowflake laptop skins or covers like we saw in the movie. Amazon has a whole selection of covers and skins with snowflakes here.

Minor spoiler quick review: This series was absolutely delightful. Maybe because I’m a writer, I really appreciated the scenes at the conference and enjoyed the lessons they were learning. From the beginning, the main characters had a natural ease with each other and great chemistry that you don’t see in every Hallmark movie. This might not have been Nine Lives of Christmas level, but it was definitely a great movie that I’d happily watch again, even if I did see the twist coming almost from the beginning. 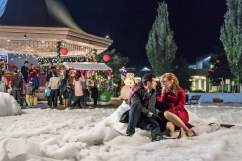 Where Was Hallmark’s ‘The Mistletoe Inn’ Filmed?