Tonight at 9 p.m. Eastern (8 p.m. Central), Hallmark Movies & Mysteries will premiere the movie, A Song for Christmas. It’s a story of a pop star and a struggling family who find the true meaning of the season together. The movie stars Kevin McGarry and Becca Tobin. After you read all about this movie and watch it, come back and share any comments or questions that you may have about the movie in our comments section below. Take time to let other readers know what you thought and talk about the movie with other viewers.

Pop superstar Adelaide Kay is so fed up with her controlling manager that she sneaks off the tour bus after their latest squabble. Though exhilarated to be free, she finds herself stranded in the freezing cold of a Pennsylvania winter, with no money and no plan. A local family, the Lapps, take her in. They know the true meaning of the season, even if they’re close to losing their dairy farm. No one in the family recognizes Adelaide except Dillon, the oldest son. He figures she’s the ticket to fast cash and plots to snap photos of Adelaide around the farm and sell them to the tabs. What he doesn’t plan, however, is their mutual attraction.”

The movie stars Becca Tobin as Adelaide Kay. She’s known for her role on the much-loved show Glee, and she also starred on Broadway’s Rock of Ages, and toured with the Trans-Siberian Orchestra. She hosts a celebrity podcast, The Ladygang, and is praised for her blog JuneMoss.com.

Other actors starring in the movie include:

Here are some more photos to get you in the holiday mood:

Learn about where the movie was filmed here: 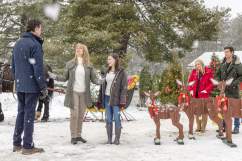 Where Was Hallmark’s ‘A Song for Christmas’ Filmed?

Read More
Christmas, Hallmark, TV
Hallmark Movies & Mysteries is premiering A Song for Christmas tonight. Find out all about the movie, including the time it's airing, the cast, photos, and more.