David Otunga is an actor, best known for his roles in The Call, WWE Raw, and The Haves and the Have Nots. The former wrestler was born in Elgin, Illinois, in 1980. Before breaking into the entertainment world, Otunga worked as a lawyer. He graduated from Harvard Law School in 2006.

Otunga was engaged to Jennifer Hudson, a singer and actress who got her start on American Idol. The two were together for 10 years, but recently parted ways. This week, things have turned ugly as Hudson claims that she is frightened of her ex after he got physical with her and their 8-year-old son, David Jr.

Otunga and Hudson ended their engagement a few months ago, but have been trying to figure out the details when it comes to custody of their 8-year-old son.

“They have been in the process of ending their relationship for a number of months,” a rep for Hudson told People Magazine in a statement.

According to TMZ, the reason for the split may have been infidelity. Sources told the outlet that Otunga found out that Hudson had been “dating someone else.” The outlet has since reported that the alleged new man in Hudson’s life is one of her producers. The name of the producer who may or may not be dating Hudson has not been released.

The former couple had been working together to figure out the best possible scenario that would benefit their son, but things “broke down” when both Otunga and Hudson wanted to be granted primary physical custody.

2. Hudson Obtained an ‘Order of Protection’ Claiming that Otunga Got Physical with Her & He Has Denied Her Claims

Things between Hudson and Otunga have gotten a bit nasty over the past couple of days. According to TMZ, Hudson has obtained an “order of protection” from a judge after she says that Otunga has shown “aggressive, threatening and harassing behavior toward me… I am now living in fear of further action David might take.”

In court documents obtained by TMZ, Hudson revealed a few instances in which she says Otunga made her feel afraid for her own safety — and for the safety of the couple’s only son.

“[Hudson] claims on Wednesday she was at a recording session in Chicago with their son… and David made a series of phone calls to reach her. When he couldn’t get her, he asked their son to record the scene. Hudson says David wanted their son to show she was dating one of her producers … something she denies. She says when she got home David was visibly angry, grabbed David Jr. by the hand and physically pushed Hudson out of the master suite. She claims their son, a makeup artist and an assistant all witnessed the incident.”

“Today, Jennifer requested and received a protective order against her ex-fiancé. Jennifer’s actions are solely taken in the best interest of their son,” a rep for Hudson told People Magazine.

“Mr. Otunga has never abused or harassed Ms. Hudson or their son, and it is unfortunate, especially in today’s climate, that she would feel the need to make these false allegations against him. Mr. Otunga looks forward to his day in court and in being awarded the residential care of the parties’ only child,” read the statement in part.

3. Otunga Proposed to Hudson in 2008, But the 2 Never Planned a Wedding

In September 2008, a rep for Hudson confirmed that the Dreamgirls star had accepted her boyfriend’s proposal. The two had been dating for less than a year when Otunga took out a Neil Lane diamond, surprising Hudson on her 27th birthday.

“I can confirm that Jennifer got engaged to her boyfriend, David, on Friday night in L.A.,” Hudson’s rep told E! News.

The following year, Otunga and Hudson became parents. Hudson gave birth to the couple’s only son, David, on August 10.

Otunga and Hudson were engaged for nine years, but didn’t get around to planning a wedding. Hudson had admitted that she thought about getting married — especially because most of her friends were taking the plunge.

“It’s been a thought obviously. After being at Ciara’s wedding, I’m like, OK. I don’t know, it inspired something. I just loved her dress. It was so beautiful. So that made me say, OK, all [of] my friends and peers are married now. You know what I mean?” Hudson told Essence in August 2016.

And, just this past April, Hudson sat down with Ellen DeGeneres where she caught fans up on her life. In that interview, Hudson said that she was still “happy and in love” with Otunga — but admitted that she wasn’t in any kind of rush to walk down the aisle.

“I’m not in a hurry. He’s not going anywhere,” Hudson told Ellen.

4. Otunga Is an Actor & Has Been in Several Movies

You might recognize Otunga from the VH1 reality series I Love New York 2 in which he played Punk back in 2007.

This year, Otunga has also starred on shows like Criminal Minds, and the aforementioned The Haves and the Have Nots.

Also in 2017, Otunga was cast in the television series New Dogs, Old Tricks and was rumored to be cast in the film Mistaken Identity. Next year, you’ll see Otunga on the big screen as he landed the role of Will in Tyler Perry’s a Madea Family Funeral.

Back in February, Otunga talked to TV Insider about how he manages to keep up with his WWE gig and have a successful television/film career.

“I talked to Dave Bautista on the Guardians of the Galaxy set, and he was saying how it was interesting that WWE doesn’t necessarily translate right to Hollywood because they are acting like he doesn’t have any credits. This guy is a six-time world champion and has main-evented WrestleMania. They don’t get it. That’s the same way for me. There was also the stigma I would face that, ‘Oh, he is a wrestler. He is not really a good actor.’ They don’t really give you a chance. Then it becomes trying to get the part without people realizing you are a wrestler. So basically you start over from zero. Well, actually you are in the negative because you have to work extra hard just to get up to the same level as the people you are competing against,” he told the outlet.

5. He’s Is a Former Wrestler & Was a Member of WWE’s Nexus

Otunga got his start in wrestling in 2008 when he signed a development contract with World Wrestling Entertainment. The deal sent him to work in Florida Championship Wrestling, one of WWE’s developmental territories. From there, Otunga appeared in several dark matches (those not televised) for the brand’s Raw and SmackDown franchises.

In recent years, Otunga switched from wrestling to commentating. He was announcing SmackDown LIVE before joining the Monday Night Raw commentary team as part of a Superstar Shake-Up this past April.

“The positioning of Otunga in The Nexus made him a valued prospect as one of the more protected members of the group. He actually won the World Tag Team Championship with John Cena at one point during The Nexus storyline. The ending of the group saw Otunga completely fall apart with no sustainable pushes. Otunga’s in-ring work just couldn’t match his other strengths. WWE has transitioned him into a broadcaster and he is currently stinking up the joint as a color commentator for SmackDown,” reports The Sportster.

In addition to wrestling and commentating, Otunga has been featured in several fitness magazines. In December 2013, he covered Muscle & Fitness Magazine, which was a “childhood dream” of his, according to his website. 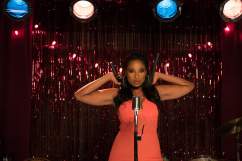 Jennifer Hudson – From ‘American Idol’ to ‘The Voice’ Season 13